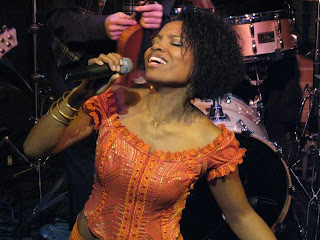 Born in Lisbon to parents from Cape Verde, an Atlantic archipelago 300 miles off the coast of Senegal, Lura considers herself a Cape Verdean. Mentored by Cesaria Evora, she sings in Cape Verdean Creole, a mélange of Portuguese and African dialects. Her songs draw on the music traditions of Santiago, the island where her father was born. It’s ready-made world music—batuku, funana, mazurka, and tabanka touched with samba, jazz, flamenco, and R&B. Rhythmic and irresistible.

This was the second time I had seen her; the first was at the Cedar in 2006, when she was barely in her 30s. Tonight, once again, she promised to take us to Cape Verde and did, in songs and stories and ecstatic barefoot dances. She’s a wonderful entertainer with a gigawatt smile, lovely to look at and very engaged with the audience—at least she tries her best to be. She had most of us staid and repressed Minnesotans clapping and singing along (sort of), but when she said she was going to make us dance, she quickly realized that wasn't going to happen. 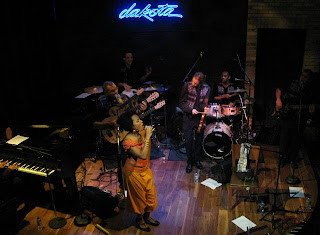 I’m not that familiar with her music, especially the song titles, but I know we heard “Ponciana,” “Na Ri Na,” “Vazulina” (a song about Vaseline, which she explains is a popular hair treatment among African people), and a lullabye by Cape Verdean composer Orlando Pantera. Her voice is strong and beautiful. At one point she tied a scarf around her waist and danced the torno. 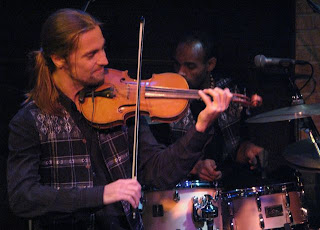 Her band is very fine. I especially enjoyed the violinist, Guillaume Singer, and was fascinated by Vaiss Dias’s guitar, which looks like a mother guitar carrying a baby guitar on her back, swimming across a stream. 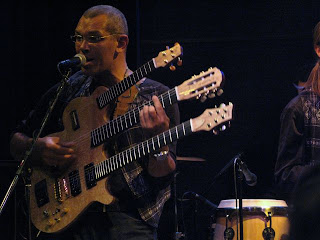 Here's a little love story, a video of "Ponciana." It's a song about a Cape Verdean girl promised in marriage to a wealthy immigrant who chooses differently.

Lura's Web site (not in English).
Posted by Pamela Espeland at 11:55 PM