Roberta Gambarini: Jazz without a net 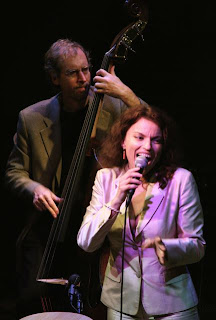 We’re at the second set on the first night of Roberta’s two-night engagement at the Dakota. The crowd is light for what is arguably one of the finest singers working today. Afterward I know I’ll hear comments like “another Ella,” “today’s Ella,” “the best singer since Ella,” and I do from the jazz aficionados in the house, people like Bevyn and Ron and Mike and Ray.

For “Easy to Love,” the title song from her first CD, she sings the verse (“I know too well that I’m/just wasting precious time/in thinking such a thing could be/that you could ever care for me…”) a cappella. It’s a good 45 seconds of being entirely on her own. Forty-five seconds is a long time. Count it out: one-one-thousand, two-two-thousand…. The piano comes in on “You’d be so easy to love” and it’s a perfect pitch match.

A song I haven’t heard her sing before, a ballad by Harry Warren, “This Is Always.” In the line “How can I forget you,” the second syllable of “forget” turns into a verse. In the line “This isn’t just midsummer madness,” the “ness” in “madness” is six or seven stops on the scale. The end (“With every kiss I know that this is always”) is almost a whisper, but an in-tune whisper.

Her singing is a high-wire act. She often ventures out without the net of her band—for measures and phrases, song beginnings and endings. The trio is playing and suddenly everyone stops and she keeps singing and then they return. Sometimes when a singer does a cappella passages and the musicians start in again it seems as if the singer grabs onto the music with combined desperation and relief. Not Roberta. She's cool.

And she scats, joyfully and frequently. “It Don’t Mean a Thing” is almost entirely scatted. I read something recently in DownBeat where a writer referred to Roberta’s “gratuitous scat.” I don’t think scatting is gratuitous unless you don’t know how to do it. Clumsy scatting, unimaginative scatting, repetitive scatting, scatting full of goofy syllables—those give scatting a bad name. But how can one argue against the voice as an instrument, and scatting as improvisation using that instrument, when jazz is so much about improvisation? 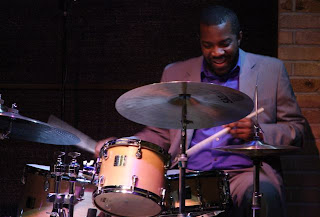 When I spoke with Roberta for MinnPost, I asked how she might explain scatting to someone who had never heard it before. “It’s part of the jazz spirit,” she said. “The way it was born, they say, was when Louis Armstrong was recording a song in the studio and the sheet for the lyrics fell. That's a very good picture of what we do, because that’s what we do. [Scatting is] a reaction to something unpredictable. It’s another way to react to the music in an unpredictable way.”

Random thoughts on “Lush Life”: How can anyone sing this song? It’s hard. (Frank Sinatra gave up on it when he tried to record it in the late 1950s.) How could Billy Strayhorn have started writing it when he was just 16? How could he have known about “those come what may places/where one relaxes on the axis of the wheel of life” or girls with “sad and sullen grey faces/with distingue traces”? How could a teenager have written a song full of so many agains? (“Again I was wrong…. Life is lonely again…. Life is awful again.”) Doesn’t a knowledge of again and its grief, regret, and hopelessness take years of living? The more I hear this song, the higher it climbs toward the Best Song Ever pinnacle.

Photos by John Whiting.
Posted by Pamela Espeland at 11:27 AM