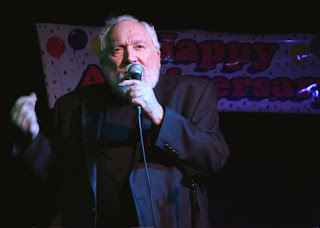 In October 1995, the Artists’ Quarter moved from Minneapolis to St. Paul, a city not known for its nightlife. Yet there it has remained, drawing jazz lovers down the stairs of the Historic Hamm Building for real jazz six or seven nights each week, every month, all year long.

Tonight, many are here to celebrate and perform: George Avaloz, the Tuesday Night Band, Phil Hey, Gordy Johnson, Dave Karr, Carole Martin, Debbie Duncan, Phil Aaron, Chris and JT Bates, Chris Thomson, Dean Magraw, Dean Granros, Peter Schimke, Tom Lewis, and I know I’m missing some because we aren’t able to come for the whole thing; it starts at 5, we arrive around 9. Just in time to hear Debbie Duncan sing “But Beautiful,” then Carole Martin rejoins her for “The End of a Beautiful Friendship.” Then the wonderful quartet How Birds Work, led by Peter Schimke, now with Chris Bates on bass. Even when Chris is standing still, he’s not standing still; he’s up and down on the balls of his feet, swaying, smiling, nodding his head, dancing with his bass.

The evening ends with a group called Shovel: Anthony Cox, Chris Thomson, Dean Magraw, JT Bates. Fine fine stuff. A tune called “Mr. Cox, High School Band Director.” Another: “Boulder Car.” Something about a car that runs on spring water and rocks? A brilliant back-and-forth between JT and Anthony on electric bass. Ellington’s “Take the Coltrane,” Anthony’s “Interracial Walk-by,” then “Verk in Progress,” a title that leads into a brief riff on Hogan’s Heroes and the number of bridges blown up on that show (Anthony: “I don’t know how the Allies got into Germany.”) 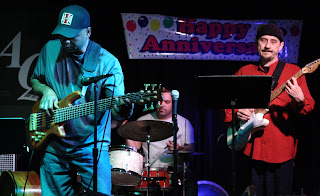 There’s supposed to be a jam session but it's already past midnight. Finish drink, pay bill, say thank-you and goodnight to Kenny, walk Jennifer to her car, go home, plan to return next weekend if not before.