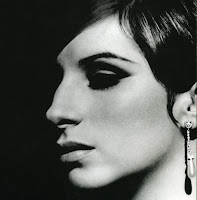 At first I thought the press release had come from the Onion:

Wasn't 1999 her final concert tour, didn't it take place in Colosseum-size venues, and didn't tickets cost thousands of dollars? Yes, yes, & yes...but now she has a new CD of jazz standards and classics, Love Is the Answer, and she's releasing it the way many jazz artists do (and others wish they could): with a concert in the storied NYC basement jazz club on Saturday, September 26.

The Vanguard seats 123 at capacity, which means elbow-to-elbow with the tables next to you. Don't call there for tickets, which are available "only to fans who either pre-order the CD or register an entry blank free of charge." See the details and rules at her website.

This won't be Streisand's first time at the Vanguard—she opened for Miles Davis in 1961—but it may be her second. Since then she's recorded a few albums, won a few Grammys, made a few movies, earned some Oscars and Emmys, Golden Globes, Peabodys, and a Tony.

The event is not yet on the Vanguard's calendar, which shows the Billy Hart Quartet (Hart, Ethan Iverson, Mark Turner, Ben Street) in residence from Sept. 22-27. Wonder if they'll play the late set.
Posted by Pamela Espeland at 9:17 AM