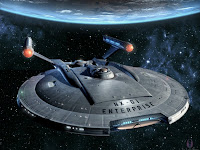 In the words of science fiction author Bruce Sterling (Mirrorshades), "Science fiction is a native 20th century art form that came of age at the same time as jazz. Like jazz, science fiction is very street-level, very American, rather sleazy, rather popular, with a long and somewhat recondite tradition."

I'm not sure about the "sleazy" but it's fun to explore the connection between science fiction and jazz.

Four of the Star Trek series—The Next Generation, Deep Space 9, Voyager, and Enterprise—wove jazz in here and there, like shiny threads in a blanket. Riker (TNG) played jazz on trombone and piano; Harry Kim (Voyager) had a jazz band. When the Vulcan Tuvok (Voyager) temporarily lost his mind, he discovered a fondness for jazz. (Thanks to the Star Trek Wiki for these and other facts.)

The movie Star Trek IV: The Voyage Home (1986) includes music by the Yellowjackets.

Last night, while other jazz fans were at the Clown Lounge listening to the Chris Morrissey Quartet (where, according to reports, it was hot, crowded, and musically splendid), I was curled up in a comfy chair with a dachshund in my lap, knitting a hat and watching episodes of Star Trek: Enterprise, which HDNet is running sequentially and without commercials.

I skipped this series when it originally aired because I couldn’t get my head around Scott Bakula as a Starfleet captain. But it’s actually pretty good. Although it takes place earlier in time than even the original Star Trek series with William Shatner, it was the most recently filmed and aired (2001–2005), so it’s the most contemporary in terms of special effects and themes. (It’s also the sexiest, but that’s a topic for another blogger. And it has the worst theme song of all the series, an awful pop tune with vapid lyrics.)

Back to jazz. In “Fusion” (season 1, episode 17), the music plays a major role. Hot Vulcan science officer T’Pol (Jolene Blalock) goes to bed one night without meditating (the reason is too long to explain) and dreams of the evening she left the Vulcan compound in San Francisco to wander the streets. She was "curious about human recreation" and decided to do some after-hours exploring.

Hearing music, she went into a bar called Fusion. The music—free jazz with screaming saxophone—roused her stuffed Vulcan emotions. "It was unusual, chaotic, but I was drawn to it," she explained. "I felt...invigorated."

Jazz is not very good for Vulcans, it seems. Just as Tuvok had to get stupid to discover he liked jazz ("Riddles," season 6, episode 6), the music leads to a disturbing scene between T'Pol and a predatory Vulcan named Tolaris (Enrique Murciano, Without a Trace, in a Beatles wig).

Was there any jazz on the original Star Trek series? None I could find. But William Shatner (Cap’n Kirk) recently read Sarah Palin’s farewell speech on Late Night with Conan O’Brien to jazz accompaniment (bass and bongos).

And then there's Sun Ra, a subject for his own encyclopedia.

If you know of more jazz–SF connections, please comment.

Jazz and sf II
Posted by Pamela Espeland at 11:28 AM