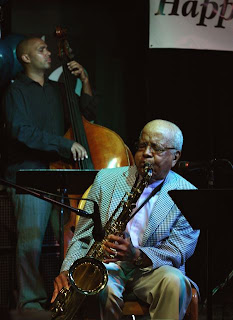 Irv Williams doesn’t turn 90 until August 17 but can be forgiven for celebrating a few days early. (The party continues on Monday night at the Dakota, where the Steeles will open.) A mainstay of the Twin Cities jazz scene since he arrived here at the start of WWII, when he was assigned to the Naval Air Station in Minneapolis as part of the US Navy Band, Williams, known as “Mr. Smooth,” is still playing beautifully, still charming his audiences, still tossing out bon mots.

Out-of-towners and others who might not know him can read a little background here.

Williams is playing a shiny new Selmer tenor sax these days, and in his words, “It’s killing me. My old one cost $900. I had to get insurance for this one. I’m a nervous wreck.” The horn he played for decades now resides in the Minnesota History Center as part of the Minnesota’s Greatest Generation exhibit. Williams says of the Selmer, “It’s a real fine instrument but it doesn’t have that mellow sound I like to have.” Yes, it does. He makes any horn sound like his own, full of warmth and depth, resonance and emotion, and living human breath, the first maker of music.

Williams plays standards (he doesn’t compose that much, although his next CD, he says, will be mostly original compositions), and tonight is almost all legacy tunes: “I Hear a Rhapsody,” “Days of Wine and Roses,” “Here’s to Life” (which he was inspired to play by Shirley Horn), "Betsi's Song" (written for his daughter), “Green Dolphin Street,” “How Deep Is the Ocean,” “Besame Mucho,” “Alone Together,” “Bye Bye Blackbird,” “Old Folks,” “In a Mellow Tone,” “Soul Eyes.” 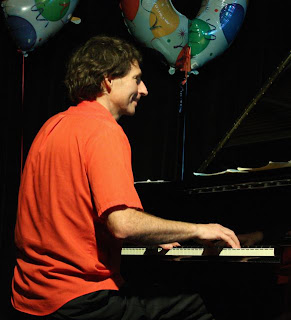 The near capacity crowd is there to listen and honor the birthday man (and eat cake, which comes later). The band is perfection. Williams shares a special simpatico with the great pianist Peter Schimke, his partner at his regular gigs and on the CD they made together in 2006, the exquisite Williams/Schimke Duo. Williams has known bassist Jeff Bailey since Bailey was a child, and drummer/AQ owner Kenny Horst has played with Williams more times than anyone can count.

After the first set, Horst gets up from behind his drums, walks over to Williams, and kisses him on the cheek. “I guess he likes me...a lot,” Williams says.

More Irvisms from throughout this enjoyable night:

On his new Selmer saxophone: “I wish I could play it.”

On playing the saxophone: “This is my 75th year playing this horn and I’m sick and tired of it. Seriously, I think it has something to do with my so-called longevity.”

On introducing the tune “How Deep Is the Ocean”: “Do you know how deep it is? I don’t. I don’t care.”

And, toward the end of the evening: “I’m old. I’m really old. I can play the race card and the old-age card. I can’t lose.” At that, he throws back his head and laughs.

Posted by Pamela Espeland at 9:41 AM