Ramsey Lewis on the British Invasion, and how a quintet became a trio 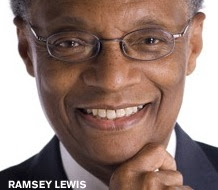 Most interviews include more than you see in the final article. MinnPost is a web publication so there are no real space restrictions, but the editors like the Arts Arena writers to keep things short and bloggy. Here's the Ramsey Lewis interview that appears there. And here's what else he said.

I mentioned briefly at the start of our conversation how "The 'In' Crowd" had been a fresh sound amid the noise of the British invasion in 1965. After talking about the connection between the blues and jazz, Lewis went on to say:

"If we move forward to the late 1950s, early 60s, and do a little bit of history, we find that there are musicians, especially in England, particularly around London and Liverpool, that discovered this music called rock and roll, but they went a step further. They wanted to find out where this music came from. They studied then the great blues masters--Muddy Waters, Little Walter, John Lee Hooker, the list goes on and on. They also studied the great R&B artists, like Sam Cooke, who definitely influenced Rod Stewart. The music caught on in Europe, especially England. Someone brought some of it over here, it caught on here and became known as the British Invasion....

"I remember those days because a friend of mine, Charles Stepney, who had a lot to do with Earth, Wind, and Fire, Minnie Ripperton, and my career...we were talking one day in the middle 60s and he said, 'Ramsey, isn't it something how they now have us imitating the music that came with the so-called British Invasion, and it's music that these British musicians came over here and studied and learned from the African-American blues and R&B musicians? They have us now imitating us.'"

I asked if he would talk briefly about the other members of his trio, bassist Larry Gray and drummer Leon Joyce Jr. That answer took a different direction than I expected.

"I found Larry Gray when I was invited to play the Havana Jazz Festival in Cuba and decided to take a trio there. Until then, I had been playing with a quintet. I needed a good acoustic bass player, put the word out, and two out of every three people I asked said Larry Gray. We went down to Cuba and had such a great time playing the festival that I decided to stay a trio. When my drummer, Ernie Adams, got an offer to go to Europe, we went looking for another drummer, and Larry suggested Leon Joyce.

"We have been together for ten years. We are compatible off stage as well as on stage. It makes life easy when we’re on tour."

Photo from the Orchestra Hall website. Ramsey Lewis and his trio perform there on Thursday, August 13.
Posted by Pamela Espeland at 11:14 PM