Trumpet Summit at the Dakota 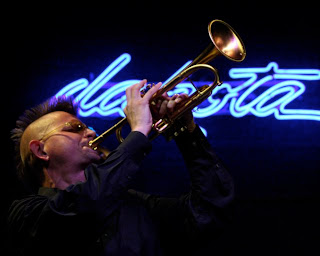 Maybe something in my brain snapped when I played “The Skater’s Waltz” with 50 other accordions (I was 12), but I’m drawn to live performances featuring multiples of the same instrument. Like two grand pianos. (Ellis Marsalis and Marcus Roberts at the old Guthrie, back in the day.) Or four trombones. (Steve Turre, Fred Wesley, Wycliffe Gordon, and Delfeayo Marsalis at the Dakota in June 2007.) Or seven trombones (Chris McIntyre’s 7X7 Trombone Band at the Stone, also in June 2007.)

Or six trumpets. That’s the most that crowds onto the Dakota’s stage at one time during tonight’s Minneapolis Trumpet Summit, an ever-changing cast of horn players backed by a rhythm section that holds it all together like an iron hand in a velvet glove. 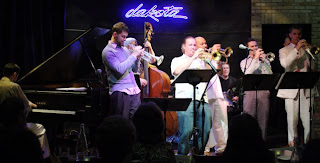 The star (and likely the instigator) of the evening is Kelly Rossum, who moves to NYC at the end of this month and is playing everywhere he can with anyone he wants to until then. “We’ll start off where it all began,” he announces, then hands us Louis Armstrong’s “When It’s Sleepytime Down South.” From the first notes, the band is swinging and everyone is on.

For the rest of the evening, trumpeters move in and out, trade solos and phrases, play harmony and unison and challenge each other. Manny Laureano and Charles Lazarus of the Minnesota Orchestra (where Laureano is principal trumpet) and recent UW-Eau Claire graduate John Raymond join Rossum for a tune by Lazarus; the rhythm section sits this one out so it’s all horns. It’s the first time I’ve heard Laureano play jazz. (His horn and Rossum’s were both made by David Monette, who also made Irvin Mayfield’s Elysian Trumpet and horns for Wynton Marsalis and Terence Blanchard.)

The rhythm section returns to back Lazarus on “Summertime.” Lazarus and Raymond share a lengthy and interesting introduction—Lazarus on mute, Raymond playing short, sharp notes—that resolves into “Caravan.” Raymond takes the first solo and Lazarus starts his on the same note Raymond leaves hanging in the air. Picture runners passing a baton.

“Sometimes this instrument is a beast to play,” Raymond says at one point during the evening, “so it’s great when you can find so many trumpets to play with.” You wouldn’t know he has any trouble at all from the confidence with which he plays, and his gorgeous tone on “A Night in Tunisia.” 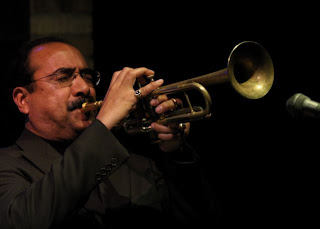 While the horns are the heroes, I’m acutely aware of Taylor on piano, Johnson on bass, and Hey on drums, and how none of this could be happening without them. Thank you, rhythm section, for your steadfastness and your expertise and your solos, which sound especially inspired tonight.

Another trumpeter comes through the curtain: young Jake Baldwin, newly-minted Minnetonka High School graduate, headed for New England Conservatory in the fall, having just spent two years in the Dakota Combo under Rossum’s direction. He’s wearing an ice-cream suit and ready to play, and he more than holds his own on “All Blues” with Rossum, Lazarus, and Raymond. Later, Baldwin solos with self-assurance, imagination, and wit. 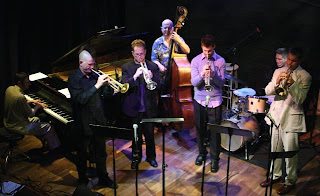 More music, more musical chairs, and the evening ends with a jam session: Raymond, Rossum, the Dakota’s own Dan Eikmeier (who plays with Big Walter Smith), Adam Meckler (who heads his own quintet), and someone I haven’t seen before—Solomon? They take us out on Lee Morgan’s “Sidewinder.”

There’s still air left in Raymond’s lungs. He stays around to play the late-night show with his John Raymond Project band: Aaron Hedenstrom on saxophones, Javier Santiago on piano, Jeremy Boettcher on bass, Brian Claxton on drums. Visit Raymond’s website to hear this fine young player. He’s releasing his second CD (a live recording) in Eau Claire on August 7, then moving to SUNY-NY for graduate studies. Like Rossum, he’ll be missed. 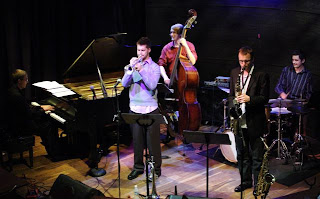 Photos by John Whiting. T to b: Kelly "Dr. Awesome" Rossum, six trumpets (Rossum is hidden behind Baldwin) and the trio, Manny Laureano, four trumpets and the trio, the John Raymond Project

Posted by Pamela Espeland at 4:00 PM