When: July 12, 2010 • Where: Dakota • Who: Bill Frisell, guitar; Eyvind Kang, viola; Rudy Royston, drums
Bluesman Paul Metsa, who attended the same set we did, wrote this on Facebook:

Metsa gave me permission to include his words here and I should just stop writing. I can’t improve on poetry and truth. But I can add a few more details, because when I’m a very old woman looking back on my decadent club-hopping, music-chasing, cocktail-swilling days, I’ll want to remember more about the music I heard on this night and why I enjoyed it so much. 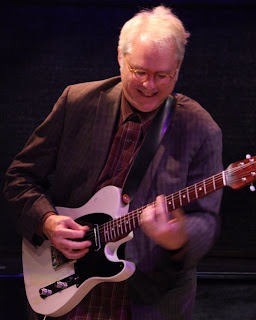 One cavil: Frisell is an artist who walks on stage and plays. At least in my experience, and I’ve seen him several times, he doesn’t talk. He doesn’t tell stories. He barely introduces his band mates. And he doesn’t tell you what he has played or is about to play. In sum, he doesn’t make it easy on writers who are trying to review a concert featuring music from a new CD that hasn’t yet been released. (Beautiful Dreamers comes out on Savoy at the end of August.) I was lucky enough to hear an advance audio stream, but still. Musicians, I’m begging you. We want to write about your wonderfulness. If you don’t feel like talking, make someone else do it.

Here’s part of the set list, to the best of my abilities (considerably augmented by later email assistance from John Scherrer): “Sweetie,” “Winslow Homer,” “Baby Cry,” and “Keep on the Sunny Side” from the new CD (the latter as a medley with Boubacar Traore's "Baba Drame" and Coltrane's "26-2"), plus Monk's "Misterioso," with Kang plucking the stepwise piano intervals. And the tender “Tea for Two” that Metsa mentions, also on the new CD.

The combination of Frisell and Kang is one I’ve heard twice before, at the Walker Art Center in February of this year (with Rahim AlHaj) and at the Village Vanguard in May (with his 858 Quartet featuring Hank Roberts and Jenny Scheinmann…all strings). The Frisell/Kang combination is made in heaven. Together Frisell’s guitar and Kang’s viola weave a cat’s cradle of sound—sometimes frail and wraithlike, sometimes dense and wailing. It’s a waltz, it’s two friends on a front porch, it’s rock and roll. 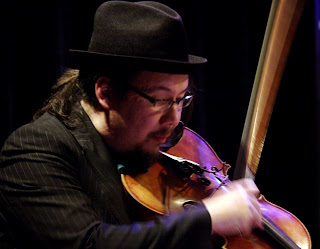 Side note: All great guitarists should be named Slash or B.B. or Muddy. Not Bill, John, Larry, Pat, Les, or Wes…please. Those names don't fit the men who breathe fire from their axes. Frisell, who describes his own music as “Jazz/Americana/Other” on his MySpace page, could have been a rock god. Might still be a rock god one day, but  a rock god who plays ethereal lullabies like “When You Wish Upon a Star."

The concert was mesmerizing, seductive, with moments of incredible gentleness and screaming ferocity. At first, for me, it was all about Frisell and Kang, while Royston played distant thunder with mallets. I especially loved the opener, “Sweetie,” a tune full of sharp turns and question marks (da-DING?). Midway through the second tune (“Winslow Homer”), Royston made a splash on the cymbals, caught my attention, and held it for the rest of the set. What a fantastic drummer. Why have I never heard him before? (Because I missed the show he played here with Tia Fuller in late May.) [Addendum: I have heard him before, at the Iowa City Jazz Festival in 2009, with Frisell, Tony Scherr, and Ron Miles.] 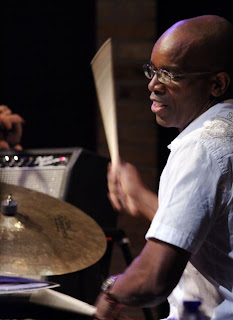 About the trio, Frisell says this on the Savoy website: “We played our first gig on June 7, 2008, in Eugene, Oregon and from the first note, it was working. Each time we get together the music feels new…and old. Backwards and forwards. Up and down. Anything is possible.” Parts of the concert were dreamy, gauzy, like a music heard from a distance late at night. Parts seemed like the soundtrack to a Tim Burton movie. Parts were "Mountain Stage," hootenanny folksy, but with dark edges, like a black border on a quilt. The music swung, it danced, it grew tipsy, it wept.

We didn’t hear “Beautiful Dreamer” or “Goin’ Out of My Head” (both on the forthcoming CD), but I’ve heard them along with all the other songs more than once, thanks to the audio stream, and I like this new album very much. Much of it is rather slow and quiet. I suspect the live shows are more lively; the one I saw certainly was. Recorded or in person, this is beautiful stuff, defying categorization but who cares?

If you want to hear Frisell speak, tune into Marian McPartland’s Piano Jazz for a session that originally aired in October 2007, available online. He sounds like the humblest man in the world.

Scherrer tells of hearing Frisell talk to an audience: "Bill was momentarily chatty at his last Cedar Center concert. He asked if he should identify the tunes he'd played (quick 'yes' from the crowd) and somehow he ends up talking about an old Gary Cooper movie and sharing a hotel room with Tony Scherr. Finally, after several minutes, he abruptly stops and says, 'I really should start playing, shouldn't I?'"

The next time Frisell comes to town, I may have a note delivered to the Green Room in advance. A polite request for tune identification, perhaps written by hand with fountain pen on a card tucked into a bouquet of roses? Or a gift basket of wild rice and maple syrup from Minnesota.

Here's a review of that first Frisell, Kang, and Royston gig in 2008.

Photos by John Whiting.
Posted by Pamela Espeland at 1:54 PM