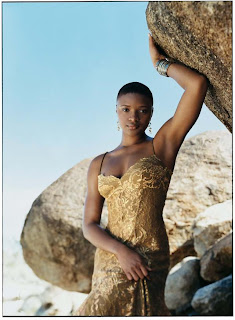 When: July 23, 2010 • Where: Orchestra Hall • Who: Lizz Wright with the Minnesota Orchestra conducted by Sarah Hicks

Singer/songwriter Wright was the first half of an unusual double bill at Orchestra Hall, with the second half being Creole-style jazz clarinetist Evan Christopher and the world premiere of a new work commissioned by the Minnesota Orchestra. Jazz vocalist Dee Dee Bridgewater was originally scheduled; when she had a conflict, Wright was brought in. It was two very different shows separated by an intermission and would have been either way. Bridgewater has been rebooked for later this year, for a holiday show with Irvin Mayfield.

Wright is better known than Christopher, and I suspect that much of the audience was there to see her. She’s about to release her fourth CD on a major label, Verve; her first, Salt (2003), debuted at #2 on Billboard’s Top Contemporary Jazz Albums chart. As a jazz singer, she’s been compared to Nina Simone, Abbey Lincoln, and Cassandra Wilson; she also sings rhythm and blues, folk, gospel, blues, and pop. Writing for the New York Times, Stephen Holden called her “an awesome talent [who] stands in a direct line of descent from Odetta through Tracy Chapman.” I saw her live at the Dakota her first time through town (in 2006). This was her Orchestra Hall debut.

Wearing a papaya-colored halter dress and no shoes, she looked dazzling, and she held the crowd’s attention through an approximately hour-long program of songs drawn from her first two albums: “Silence” (Salt), “Walk With Me, Lord” (Salt), Neil Young’s “Old Man” (Dreaming Wide Awake), “Soon As I Get Home” from The Wiz (Salt), and the title songs from Dreaming Wide Awake and Salt.

To me, this felt like a pop program. I was fine with that. Wright’s voice is so rich and delicious that I really don’t care what she sings. There were moments that worked spectacularly well—the gorgeous, string-filled “Dreaming Wide Awake”—and moments when things fell apart ever so slightly among Wright, the orchestra, and the pianist and drummer at the front of the stage with her (her band?), but overall it was well done, with conductor Hicks holding the strings in her sparkly black top and high heels.

I wish there had been more variety in tempo and feel. A program of mostly sultry ballads edges toward monotony. Why no songs at all from The Orchard? That album includes “I Feel the Earth Move,” and I could have used a little Carole King (though Wright slows that song down as well). I’m assuming no orchestra charts yet exist for the new CD, Fellowship, due out this fall. It all felt a little stuck in the past—too much from Salt. And yet, that fabulous, full-bodied, languid contralto voice; that riveting stage presence; that confidence and beauty and regal sexiness. Wright is a force and a power. She more than held her own in front of a major symphony orchestra, and people enjoyed her performance very much, to judge by the comments I heard on the way out and afterward. Personally, I prefer her in a smaller room, with a smaller band.

P.S. A friend who was sitting in the first tier writes: "Did you notice Prince come in just for the Lizz Wright piece? Incognito, sat down just 20 seconds before she started and disappeared immediately after she was done." Comments? Confirmation?
Posted by Pamela Espeland at 11:25 AM