It felt like I had wandered into someone else’s party. Most other people who had come to see Roy Ayers knew his music; many had grown up with it. I was a brand-new fuzzy yellow chick to his music. A fuzzy white chick. Like Rachelle Ferrell back in May, Ayers drew a sizable black crowd to the Dakota, which was recently named Music Venue of the Year at the Minnesota Black Music Awards.

I'd read that many artists have sampled Ayers’ music (Mary J. Blige, A Tribe Called Quest, P. Diddy), and heard Guru’s Jazzmatazz Vol. 1 track, "Take a Look At Yourself," that features him (R.I.P., Guru), but that was as far as I went until Wednesday night.

(If you want to hear how various artists have sampled Ayers’ music, check out a website called WhoSampled, but be warned: you will spend a lot of time there.) 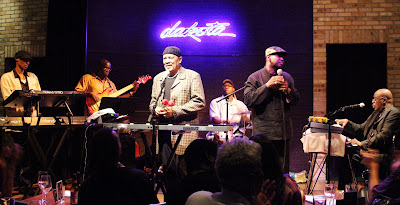 At first it was too quiet storm for me (“No Stranger to Love”) and too loud (earplugs needed) but Ayers and his band drew me in. I couldn’t help it. The beats, the grooves, even Ayers’ banter (“Some of us don't trip. Those who don't trip need to trip") were irresistible. There was a lot of talk, and some fooling around onstage, but when that band got serious you just fell in. And when Ayers really played the vibes—in longer solos, not just musical punctuation marks—the sound was liquid silver and gold.

"No Stranger" was followed by “Woodpecker,” with Pearson playing rat-a-tats on the drums and Gaskins contributing an impressive sax and keyboards duet all by himself: sax with his left hand, keyboards with his right. A lengthy, funky jam-band track. “The Third Eye,” a tune (Ayers explained) “from when I was into my spiritual thing, Kahlil Gibran” that became a spoken word piece.

People called out names of songs they wanted to hear: “Daylight,” “Running Away,” “Everybody Loves the Sun.” Promises were made.

Next up, “Shady Lane,” with a spoken homage to Ray Charles, Curtis Mayfield, and Michael Jackson. The deliciously groovy “Searchin’.” “Baby, You Got It,” during which Gaskins quoted Joni Mitchell’s “Big Yellow Taxi”: You don’t know what you’ve got ’til it’s gone.

I was kicking myself. How could I have known about Barry White and completely missed Roy Ayers?

Then “Running Away” (doobie-doo-run-run-run). The crowd was on its feet for most of this one. Gaskins played a screaming soprano sax solo and Ayers took a luscious turn on his electric vibes. “You Send Me," an infectious version of the Sam Cooke tune ("you-you-you-you-you-you send me"). “Everybody Loves the Sunshine” with a reggae beat. Just bees and things and flowers.

I looked around and saw how happy everyone was—Ayers, the band, the women sitting in front of me, Deborah to my right, Robert at a table in front of us. I was happy, too.

It was a generous set. If you already know Ayers, I suspect you’ve heard a soundtrack in your head as you’ve read this.

Where should I start my Roy Ayers collection?


Listen:
Running Away
Everybody Loves the Sunshine
You Send Me

Photos by John Whiting.
Posted by Pamela Espeland at 3:15 PM