When: July 20, 2010 • Where: Dakota • Who: Preservation Hall Jazz Band, with Charlie Gabriel on clarinet/saxophone, Frederick Lonzo on trombone, Rickie Monie on piano, Clint Maedgen on vocals/reeds, Will Smith on trumpet, Ben Jaffe on sousaphone/tuba/bass, and Joseph Lastie Jr. on drums
It’s the Dakota debut of the world-famous traditional New Orleans jazz band, which usually plays Orchestra Hall. All four shows sell out; we're at the final show on the second night.  The music is relaxed and amiable, salted with over-the-top showmanship: Maedgen’s mannered take on “You Are My Sunshine,” Lonzo’s circular breathing on the trombone.
I especially like Smith’s singing on “Basin Street Blues,” his voice like a big horn. Trumpeter Irvin Mayfield is in the house, in town to play at Orchestra Hall on Friday with Evan Christopher, and he joins the band for a couple of numbers including “Old Man Moe Is Dead.”
The spotlight is often on Lonzo, who takes the trombone so low (as the others egg him on with “Don’t breathe, Freddy…Don’t die, Freddy”) that the slide comes off and he needs help from a woman in the audience to put it back on. Trombone intact, he moves right into “Has Anybody Seen My Gal”?
It’s about music, and tradition, and storytelling, and having a good time. Other tunes we hear tonight: “Bourbon Street Parade,” “Whenever You’re Lonesome,” “Save That Tiger,” “Last Chance to Dance” (with a second line around the club—I’m starting to think every live concert should end with a second line), and the encore, “When the Saints Go Marching In.”
Jaffe (the band’s director as well as its sousaphonist/tubist, son of original founders Allan and Sandra Jaffe) tells us that Prez Hall’s first time ever playing outside of New Orleans was in Minneapolis, in 1963, at the old Guthrie theater. And that they came back the following year to make their first recording, Sweet Emma and Her Preservation Hall Jazz Band. They were sponsored by a group of fans headed by Dr. Henry Blackburn, who fell in love with jazz while attending med school in NOLA. Blackburn is in the audience tonight.
Members of the band appear in the August 2010 issue of Playboy, dressed to the nines and shot by celebrity photographer Danny Clinch. There’s talk of opening Preservation Halls in other cities. Since Prez Hall didn't start as a concept or a brand, and because the original venue in the French Quarter is so special, I'm not sure how it will translate into other spaces and places. Should it become just another chain? 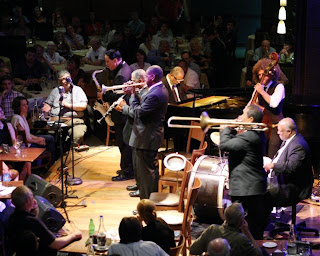 Embraced by the crowd. 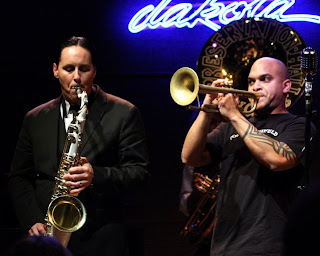 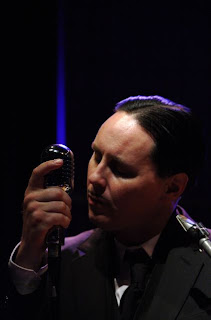 Maedgen at the vintage mic, with light from the neon blue Dakota sign reflecting off the wall behind him. Magic! John calls this "Torch Singer."
Photographs by John Whiting.
Posted by Pamela Espeland at 2:29 PM