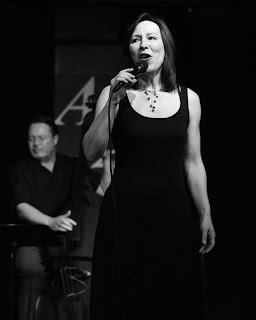 There are good nights in jazz, and okay nights, and off nights, and then there are great nights when the unexpected happens and you almost forget to breathe.

Last night at the AQ was one of the great nights. Not because we were in a giant venue in a crowd of thousands with a jazz legend—someone like Sonny Rollins, which these days is kind of like seeing God Almighty play saxophone. We were in a small basement jazz club in St. Paul, where a jazz singer from New York named Kendra Shank has a two-night engagement with three area musicians, two of whom she has played with before (ten years ago) and one she met and rehearsed with briefly for the first time on Friday afternoon, only hours before the first set.
Shank is a fearless improviser and interpreter, which is important to know. She usually performs with her own quartet (also important to know), musicians with whom she has built an intimate relationship over many years: pianist Frank Kimbrough, bassist Dean Johnson, and drummer Tony Moreno. On this tour, the second half of a tour for her most recent release, Mosaic (Challenge, 2010), she’s traveling solo, as many artists do in this economy, working with artists recommended by club owners or friends along the way.
For her AQ dates, Shank is playing with pianist Bryan Nichols, bassist Terry Burns, and drummer Phil Hey. Shank and Nichols are new to each other. While any musician in a group this size can make or break a show, much of the conversation happens between voice and piano. What kind of conversation will it be? Will the two be equals? Will the voice make room for the piano, and the piano make room for the voice? Will they soar and inspire each other or simply get along?
From the first moments of the first song, Cole Porter’s “All of You,” something happens between Shank and Nichols. Then all four leap off a cliff together with “Incantation/Throw It Away,” a blend of Shank’s improvised introduction and the Abbey Lincoln song.
“Incantation” is a mix of vocal clicks and aahs, ticka-ticks and soft whoops—not the usual scat sounds/syllables—that Shank later explains is her own private language, “whatever comes through the channels on a given night.” Just try playing along with that. In fact, Nichols, Burns, and Hey know exactly what to do. Nichols is the perfect partner, his own improvisations equally thrilling. Burns lays down a flawless rhythm. Hey drums with the flats of his hands, a soft, sensuous accompaniment. It’s glorious, and as the song unfolds, they all become aware of what they’re creating in this moment. It’s as if lights go on over their heads, and within their faces.
Afterward, Shank describes this rare and wonderful thing as “the universal language of jazz—the coming together.” The rest of the set stays at the same dizzying height: “I’m Movin’ On” (during which Burns plays a lovely solo); “Reflections in Blue/Blue Skies,” a completely different take on the old tune, rhythmically and emotionally, thanks to Shank’s searingly personal introduction (“Blue was the color of his eyes, on the day he left me…Then you came in view…No more good-byes…Just blue skies, smiling at me”). A song about hope, written by Kimbrough; “How Deep Is the Ocean,” with a lively improvised ending; a sweet, swinging “Blue Monk,” with Abbey Lincoln’s lyrics; and finally Shank’s passionate, powerful reading of “Black Is the Color of My True Love’s Hair,” which can stand proudly beside Nina Simone’s.
Midway, between songs, when everyone is all smiles, Shank says, “I’m in love. I might have to move to St. Paul. I’m in love with these men!” We are, too, and also with you. Kendra. What an exciting, exceptional evening, and it could only happen live.
Photo of Kendra Shank and Terry Burns by John Whiting.
Posted by Pamela Espeland at 11:52 AM