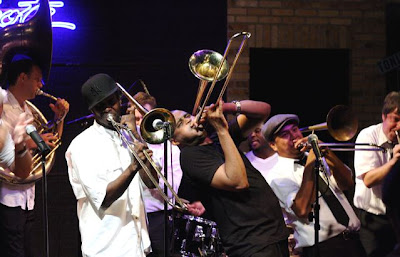 When: Saturday, July 17, 2010 • Where: Dakota • Who: Glen David Andrews Band (including Andrews on trombone and vocals, Revert "Peanut" Andrews of the ReBirth Brass Band on trombone and vocals, Erik Jacobsen of Mama Digdown's Brass Band on sousaphone, and others)
The show was supposed to take place outdoors and it’s probably good that it didn’t. It could easily have turned into a street dance, a second line, a riot that burst beyond the confines of the closed-off block of Nicollet Mall where the Dakota Street Fest was taking place, leading to arrests and unflattering mug shots of Dakota owner Lowell Pickett and his staff. Instead, fierce storms and tornado warning sirens forced the remaining hours of the Street Fest indoors, and that’s how New Orleans vocalist/trombonist Glen David Andrews ended up crowd surfing among the tables.

But I jump the gun. There was music happening inside the club as well as on the street, and when the sirens blew, everyone crowded into the Dakota and musicians piled up in the green room. Charmaine Neville’s set outdoors, which followed Bonerama's, was cut short. Vocalist Debbie Duncan, who was singing indoors, finished her set and was followed by bluesy, rollicking Davina and the Vagabonds, who made way for fiery Cuban pianist Nachito Herrera, who was scheduled to play on the Peavey Plaza stage outdoors at Orchestra Hall until the weather rolled in. Nachito’s 15 minutes turned into a half-hour and then it was time for Andrews and his band.
From Debbie to Davina to Nachito was a crescendo of sound and rhythm and excitement, and when Andrews came out, the room went boom. 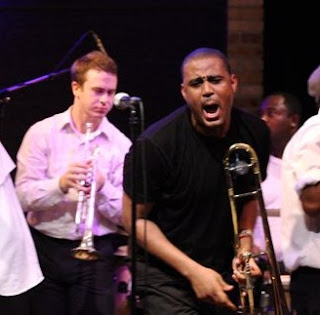 Pickett had been talking up Andrews for weeks, but we still weren't prepared for what we saw. He prances. He poses. He crouches and bends backwards. He sings—bellows, roars—in a voice full of gravel and grit. He screams and yells “Somebody Scream!” He jumps up and down and shouts “Jump Up and Down!” We do whatever he tells us to do.
He oozes charisma and sex appeal while singing gospel tunes. He lobs the occasional F-bomb. Blowing his trombone, he struts through the room, up the stairs, along the mezzanine and back again. He asks for twelve strong men to approach the stage, then launches himself at them and demands to be carried through the crowd. He sweats, sends servers after towels, orders tequila shots for his band.
Andrews will not tolerate a passive, seated audience. He exhorts, he cajoles, he absolutely insists you get up and take part. Most of the crowd was on its feet for much of the set, dancing and clapping and waving black Dakota napkins in the air. Someone near us got so fired up he tried to dance on his table. Lucky for him, his friends caught him as he fell. He looked mortified, briefly, then popped back to his feet, raising an umbrella in the air.
It may have been the most raucous night in the 25-year history of the Dakota, including both locations. It’s the only time I’ve felt the floor move. People stood on the mezzanine, the stairs, at the bar, in the doorways. They screamed. They jumped up and down. They raised their hands and shook their behinds and sang along. 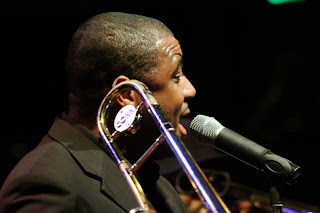 We heard “This Little Light of Mine” and “Just a Closer Walk with Thee,” “St. James Infirmary” and “Down in the Treme,” the title song for David Simon’s HBO series Treme, in which Andrews appears, as does his cousin, Troy, better known as Trombone Shorty. During “Wonderful World,” Andrews started saying goodbye, as if that were the last song, but it was only a ploy to rile the crowd further for a manic medley of “When the Saints Go Marching In,” “Proud Mary,” “Down in the Treme,” “Born in the USA,” a salute to the troops, and another run around the room, this time followed by much of the crowd, second-line style. At the very end, around midnight, once Andrews had made his final exit, people were dancing across the stage, including a Dakota server with a clutch of guest check folders in her hand.
Here's a recent video (June 2010) of Andrews leading a symbolic second line around Jackson Square in protest of New Orleans' crackdown on musicians playing after 8 p.m. You don't know about that? Read Larry Blumenfeld's article here. Crazy.
Here's "Walking Through Heaven's Gate," recorded live at Zion Hill Baptist Church in the Treme neighborhood. 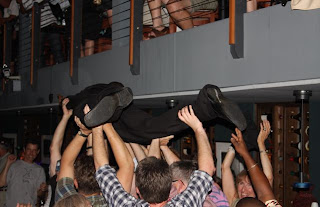 The south end of a northbound Andrews 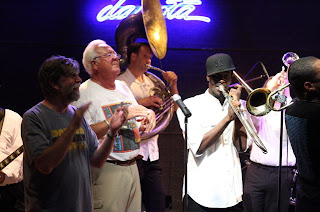 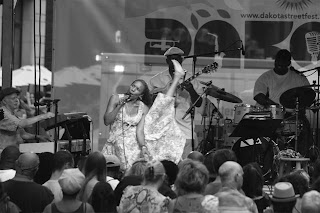 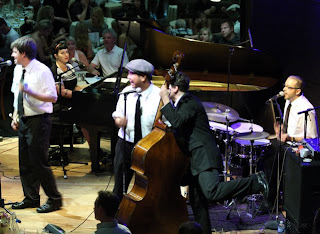 The lovely Davina and her Vagabonds 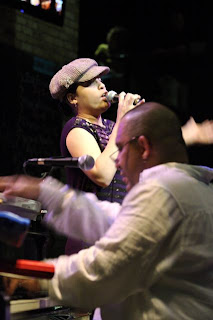 Photos by John Whiting
In the second photo from the top, the pale trumpeter behind Glen David Andrews is our own Dan Eikmeier. Go Dan!
Posted by Pamela Espeland at 1:41 PM