While I might have been at the Dakota hearing Alexander O'Neal or Hell's Kitchen enjoying Sophia Shorai or any one of many other venues in town featuring live jazz (check the calendar, boys and girls), I was at the clumsily named but well-appointed Kerasotes Showplace ICON Theatre at West End in St. Louis Park watching the concert film of Eric Clapton's Crossroads Guitar Festival 2010.

A benefit for Clapton's Crossroads Centre, a drug treatment center located in Antigua, the festival was held this year in Chicago on June 26. Star Tribune music critic Jon Bream went and called it "the best one-day all-star rock event I've witnessed since the Concert for the Rock and Roll Hall of Fame in Cleveland in 1995." He noted that a two-hour version would air on July 27 in 475 movie theaters and I thought...why not?

It's a good concert film. Lots of close-up camera work of fingers picking, plucking, strumming, tapping, and sliding along guitar strings. More guitars than I have ever seen in one place. I was reminded of why I like Robert Cray so much, amused (not meaning any disrespect) by ZZ Top, hypnotized by Derek Trucks (how can he look so angelic and play like such a beast?), enchanted as always by Vince Gill, moved by 78-year-old Hubert Sumlin (Howlin' Wolf's former guitarist, now on oxygen), more interested in John Mayer than I expected to be, and worried that the wide silver bracelet Jeff Beck wore on his upper right bicep would cut off his circulation. Gary Clark Jr.'s playing style is fascinating; his long, spidery fingers flail over the strings. Lang is a lot less skinny than I remember. He's man-sized now, not boy-sized. Buddy Guy is gravitas incarnate, a Buddha of the guitar.

Although B.B. King performed at the festival, the film did not include him. Lately the great man talks more than he plays. That was true when he played the Minnesota State Fair Grandstand in 2007, along with Al Green and Etta James. 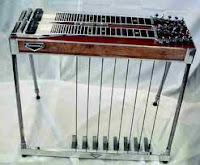 I saw a pedal steel guitar close-up for the first time, played by Robert Randolph. What a glorious instrument that is—but you have to play it sitting down. It's like a guitar built into a table.  This must in some ways be a disadvantage. Sitting does not allow for strutting, and strutting is a big part of being a guitar hero.

I don't get Sheryl Crow. Susan Tedeschi is amazing. Who's Citizen Cope? (On the way out, a women in front of me was saying, "I couldn't understand a word he sang and his eyes looked funny. Was he high?") Ron Wood wore an "I Feel Like Painting" shirt and I flashed on Tony Bennett. (Why do all the Stones look so...how to say this...scary?) Brief glimpses of Cesar Rosas and David Hidalgo were insufficient. I was surprised to see Earl Klugh but in retrospect I don't know why. Would have liked to see more of Keb' Mo'. And more women. They were rare on stage (Crow, Tedeschi, a pair of backup singers, an electric bass player) and, it seemed, in the audience as well.

Steve Winwood sounds exactly the same as he did in the 1960s. It's uncanny. I prayed for "The Low Spark of High-Heeled Boys," but he and Clapton played "Had to Cry Today" from the Blind Faith days instead, then "Voodoo Child." Music of the wayback machine. Clapton did a wonderful "I Shot the Sheriff" ("but I did not shoot no deputy") and everyone came on stage for the finale, "Sweet Home Chicago." I thought about what it must have been like to stand for 11 hours at Toyota Park hearing the whole concert. Two hours in a comfy seat with popcorn, a cherry Coke, and HH by my side worked for me.
Posted by Pamela Espeland at 11:46 PM