CD review: The David Leonhardt Trio: Bach to the Blues 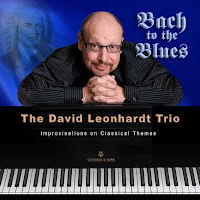 Years ago, a friend gave me a tape (I said years ago) of French jazz pianist Jacques Loussier playing music by Bach. I liked it so much I went looking for more. I now have a collection of “third stream” music, a term coined by composer Gunther Schuller in the 1950s to describe a synthesis of classical music and jazz, complete with improvisation.

I’m pleased to add the recent release by the David Leonhardt Trio, Bach to the Blues (Big Bang, 2009). It’s a diverse collection of tunes that will be familiar to almost anyone with some knowledge of classical music: works by Bach, Debussy, Schubert, Satie, Beethoven, Pachelbel, Chopin, and Copland (“Simple Gifts”). The original themes are clearly stated before the trio—Leonhardt on piano, Matthew Parrish on bass, Alvester Garnett on drums—takes off and does its jazzy, bluesy thing.
Some reviewers tiptoe around this kind of music, as if the conflation of classical with jazz is bound to offend sensibilities in both camps. How is it any different from jazzing up a Sigmund Romberg tune (“Lover, Come Back to Me,” “Softly, As In a Morning Sunrise”) or turning “Someday My Prince Will Come” from Disney’s Snow White into a jazz standard? Simple answer: It isn’t any different. Any tune with good bones can be played as jazz.
Leonhardt’s arrangements are delightful. Bach’s Prelude in G Major starts off fairly straightforward (with jazz syncopations—no classical musician would play the opening in quite this way) before settling into a sweet, swinging groove interspersed with occasional straight phrases (brief reminders of the original) that act as transitions between inventive solos by all three trio members. Much of the final minute and 15 seconds is as Latin as Tito Puente. Unexpected and joyful.
Debussy’s “Claire de Lune” is played as a big, beautiful jazz ballad, with thick piano chords and depth in the bass and drums. It’s mood music with piano at the forefront. Same for Schubert’s “Ave Maria,” though it takes a long time—almost halfway through the 4:15 track—for the piano to move beyond the melody.
Satie’s “Gymnopedie No. 1” is such a simple tune, but one with endless possibilities, and this trio explores them all. (While Loussier takes a dreamy, atmospheric approach, Leonhardt is more lively and playful.) Bach’s Prelude in A minor is propelled by whispery bebop brushwork by Garnett on drums and cymbals. (I think he’s using brushes; I have also seen/heard him play with his hands with as much delicacy and precision.) The Adagio from “Pathetique,” one of Beethoven’s most tender compositions, is as poetic as one could hope for, the improvised sections only carrying the poetry further.
Leonhardt’s version of “Simple Gifts,” the Shaker melody Aaron Copland brought into his score for the ballet Appalachian Spring, leaves the melody behind at about 1:30 and ventures into more interesting (to me) improvisational territory, with cooling little cascades of piano notes, then returns to the melody with renewed energy and assertive statements from Parrish’s bass.
Two Chopin mazurkas (G minor and C major), Bach’s Prelude in B-flat, and Pachelbel’s Canon in D, round out the disc, with the G-minor mazurka emerging as my favorite, thanks to Garnett’s addition of a refreshing ting from a little bell and Parrish's lengthy, thoughtful solo. The B-flat prelude has a seriously swinging midsection that once again includes little nods to the original. The C-major Mazurka is bright and sprightly, and while I was sure I never wanted to hear another version of Pachelbel’s hoary old Canon in D, I was drawn into Leonhardt’s: slower, darker, and more measured than the original, minor-key chords given room to fade, mallets soft on drums, bass even softer. I forgot all about the Canon. The final track on Bach to the Blues is enjoyable late-night jazz, intimate and moonlit.
Here’s a video of Leonhardt and his trio playing the G-major prelude at the Iridium in New York City.
Posted by Pamela Espeland at 1:22 PM