Jazz Bookends on a Sunday: Reuben and Dan Ristrom, and the Gerry Hemingway/Terrence McManus Duo 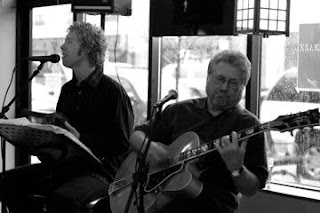 Tryg’s in St. Louis Park often has live music but doesn’t keep its online calendar up to date (hint), so we weren’t expecting to hear anyone when we met a friend for brunch on Sunday. It was a pleasant surprise to find guitarist Reuben Ristrom and his son, Dan, tuning up in a corner of the bar, where the big windows were open and the summer breezes blew through.

I have a special affection for Reuben Ristrom. I heard him fairly early when I started listening more seriously to jazz, and he opened my ears to jazz guitar, for which I’m grateful. I’d never heard Dan before. I think he mostly plays rock, which is probably why I’ve missed him. As a jazz artist, he reminds me of John Pizzarelli, a good thing in every way. His voice is clear and fresh, with a lovely vibrato; his stage presence is warm and engaging, and he’s all about entertaining. I like that he’s out with his dad. You can hear them together every Wednesday at Sawatdee in Maple Grove. Listen to “Blue Skies” (song 4) and/or “Ain’t Misbehavin’” (song 6) on Dan's MySpace page. At Tryg’s, we heard several jazz standards, a Beatles medley, and some James Taylor. The perfect soundtrack to a Sunday morning with mimosas, or a Wednesday with Thai food.

The word “improvisation” always gets my attention, so when we heard that the improvising duo Gerry Hemingway and Terrence McManus were coming through town on tour, we made a date to see them at the Rogue Buddha. I don’t know them but there was enough buzz from the Clown Lounge crowd that I wanted to check it out.

Two events were scheduled for Sunday: a master class at 4 and a performance at 7. Travel problems caused delays (all roads leading in and out of Mpls/St. Paul are torn up) and the class didn’t start until 5:45. When we arrived at 7, the class was ending and the musicians needed a break. The performance began around 7:30—sooner than expected, all things considered. 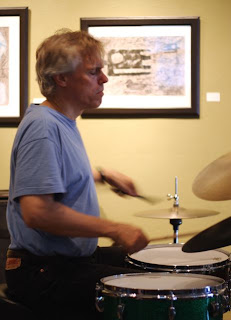 We, an audience of 14, heard two selections, each about a half-hour long. The first started with a whisper, Hemingway patting his drums softly with his hands, McManus tapping the strings of his guitar (held in his lap) with the handle of a screwdriver. The strings hummed and whistled. Each artist had an array of implements—bows, metal pieces, balls, sticks, paint brushes—on the chair beside him, to choose from as the evening progressed.

As light from the evening sun danced across his face, McManus bowed his strings. Hemingway pedaled the hi-hat so softly I might have been imagining it. A beat emerged, sort of, maybe a rhythm, not a melody. The piece grew louder, more intense. The guitar made train sounds. McManus slid a piece of metal under his strings, then touched them with a paint brush handle; Hemingway switched to a mallet and hands. McManus slid a large piece of paper under his strings, tore it, blew on it, left pieces of it hanging from his guitar. He lifted his guitar from his lap, held it in his arms, and began plucking the strings with a plectrum, paper still in place. The strings wailed and Hemingway switched to sticks and the gallery filled with sound, which subsided into sweet notes on the guitar and soft drums to end.

I liked it. The sounds were unpredictable (I haven’t mentioned a quarter of the things Hemingway and McManus did) but related, a dialogue. The music had an arc; it told a story. 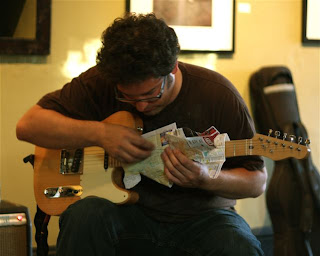 For the second piece, Hemingway hummed into what looked like a trumpet mute but HH said might have been a spotlight reflector—a round, dented metal thing. The sounds he made were hollow, fluttery, high and singing, and deep as a didgeridoo. McManus used an ebow, a hand-held electronic bow for guitar. (Thanks, Joel Shapira and Keith Lee.)

I found the second piece less interesting than the first. In the warmth of a summer evening at the end of a Sunday, it seemed a bit slow and snoozy. Afterward McManus asked Hemingway if he’d been playing some Strayhorn and Hemingway said yes (I think; I was eavesdropping). If he had, I missed it.

I felt the set was a bit short but understood it had been a long day involving travel on difficult roads. They’re playing again at the Clown on Monday, where I suspect things will heat up more than they did last night.

Visit Terrence McManus’s website to hear a clip of him playing solo. Go here to hear the duo. Click on links within this piece to hear an excerpt from the duo recording and watch videos.


Photo of Dan and Reuben Ristrom from Reuben's website.
Photos of Gerry Hemingway and Terrence McManus by John Whiting.
Posted by Pamela Espeland at 6:38 PM