The successor to a Grammy winner is eagerly awaited, then examined under a high-powered microscope. Will it be as good? Will it be better? Will it be a letdown?
Fans of jazz singer Kurt Elling who have waited a year and a half for the follow-up to 2009’s Dedicated to You, his Grammy-winning tribute to/reinterpretation of the John Coltrane/Johnny Hartman classic, will be thrilled by The Gate. Listeners new to Elling (and to pianist/arranger Laurence Hobgood, Elling’s longtime collaborator) will want to catch up on earlier albums.
Among male jazz singers today, right now, Elling stands alone. He simply has the most exceptional voice out there. Famously spanning four octaves, resonant and warm, it mostly lives in baritone land but can rise to a dazzling falsetto. He’s a master of dynamics and phrasing, texture and tone, and his swing seems effortless, like breathing. One moment he can woo you with a tender ballad, the next astonish you with rapid-fire, acrobatic scatting. He’s a romantic and a hipster, sincere and playful, authentically charismatic. He writes his own vocalese lyrics, many of which are pure poetry.
It seems there’s nothing he can’t do, and if he’s increasingly being mentioned in the same breath as Frank Sinatra and Mel Torme and Louis Armstrong, it’s because he deserves it.

Like most real jazz artists, Elling is best experienced live, where you can see firsthand the choices he’s making and the risks he’s taking, his close working relationship with Hobgood, the way he uses his whole body to deliver a song. After seeing Elling live in Ottawa in December, jazz writer Peter Hum described him as a “musical maximalist, setting his sights on rendering one tour de force after another.” I’ve seen him several times over the years and have always been completely caught up in the music, whether he’s performing with his own band or a big band in Fargo, with Stefon Harris or Nancy King or Richard Galliano.
Between live performances—and if you’re a jazz fan, especially a fan of jazz vocals, one live Elling performance is not enough—his excellent CDs are the next best thing. 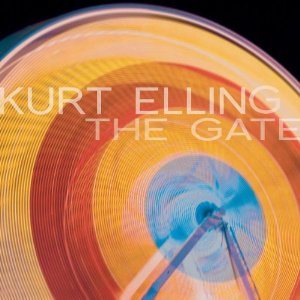 
Is it better than Dedicated to You? That's an apples-and-oranges question. Dedicated to You was a project CD, born out of a commission for the 2006 Chicago Jazz Festival that became a concert, a tour, and a successful recording. The Gate is, as Elling told Chicago Jazz Magazine, "an obvious step forward, specifically down the road we were going down when we did Nightmoves, which was in its way another step down the road from everything else we've done...it all seems to be a very clear advance for me."


If you’re wondering why the new CD is called The Gate, here’s what Elling told Peter Hum:

RELATED
The Gate will be released on Tuesday, February 8. The Kurt Elling Quartet featuring John McLean will perform at the Dakota on Wednesday and Thursday, February 9 and 10.
Through February 7, Concord is offering The Gate at a pre-release savings of $3.99 off their already low price of $13.98. Discount available only at the Concord website. Use promotional code FBKURT2 at checkout. (Thanks, Trudy.)
"Kurt Elling and Laurence Hobgood...In their own words" is a lengthy and informative interview available at Chicago Jazz Magazine.
Read my reviews of Kurt Elling concerts in New York, Saint Peter, MN, and Fargo, ND. My bad; I haven’t yet written a review of his performance at the Allen Room in 2010 with Richard Galliano, during which he sang in four languages.
Posted by Pamela Espeland at 4:49 PM