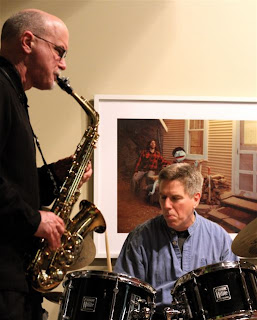 What happens during improvisation? Over the past several months, I’ve been asking jazz musicians that question in a series of interviews for mnartists.org called “Conversations on Improvisation.” The answers are never the same.
In my head, I get that improvisation is a combination of musical knowledge and technical virtuosity, choice-making and risk-taking, listening and responding, playing and waiting, starting and stopping, and spontaneous composition, all in real time that speeds up for some and slows down for others.

In my heart, I think it’s magic.
Last night at the Black Dog in St. Paul during a snowstorm, saxophonist Pat Moriarty and drummer Phil Hey made magic, although they hadn't played together as a duo in many years. 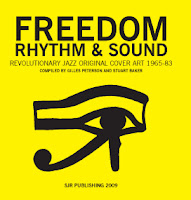 They met in the mid-1970s and recorded one album, Let Them All Come, released in 1978 and known among those in the know. Writing for the Strib, Tom Surowicz called it "one of those 'private label' collector's albums that show up for big bucks on e-Bay." The cover, designed by St. Paul classical composer and trombonist Homer Lambrecht, appears in Freedom, Rhythm, and Sound: Revolutionary Jazz Original Cover Art 1965–83, compiled by Gilles Peterson and Stuart Baker, published by Soul Jazz Records Publishing in London. (Side note: Peterson is the guy who signed Jose James to his first record deal.) Pat still has copies available in the original shrink wrap; in his words, “some of them may be playable.” 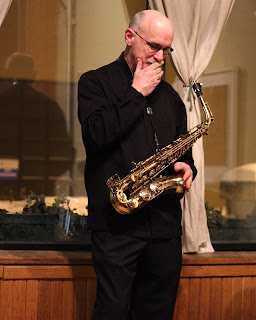 In spite of the storm and the traffic, which delayed Phil's arrival (and the Black Dog has no house drum set, which meant he had to bring everything, cart it in, and set it up), the pair drew a crowd, partly because of their sterling reputations as musicians and educators, partly because word had gotten out.
In two sets, we heard four lengthy selections: a free improvisation; their version of Ornette Coleman’s “Round Trip”; another free improvisation, this one with a very Eastern sound and feel; and their version of Coleman’s “The Blessing,” a tune with a melody so bright and inviting that it sounds like a sunrise.
Jazz artists have told me that starting a free improvisation is the hardest part, but Pat and Phil had no apparent problem starting. Mostly they played together, with Pat stepping back for brief periods so Phil could solo. At times, especially during the second free improvisation, it sounded like Pat was playing multiple alto saxophones. He whispered and wailed and told stories on his horn, exploring its full range and many voices. He has such a beautiful tone and he’s so musical that his wails and occasional shrieks are expressive and emotional but never painful.
Along with his drums, Phil had brought several small percussion instruments: wood blocks, bells, a small gong, and something that looked more like a plumbing tool than a music-maker, a metallic half-ball with a spring-like handle. During the second improvisation, he lay the gong on top of a tom and hit it with a stick; during “The Blessing,” he held it and struck it, eliciting a symphony of sounds from a circle of brass. 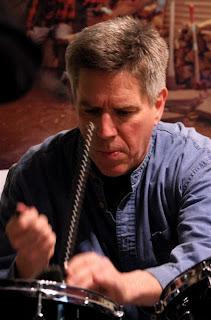 For the first part of “The Blessing,” Phil played mostly brass: the gong, bells, cymbals, and the hi-hats, which he held open with the foot pedal. I didn’t know until last night that the bottom hi-hat has such a sweet, delicate sound. For the latter part, he returned to the drums and did that Phil Hey thing that always astounds me: Nonchalantly, like a walk in the park, he made his drums sing the melody. How does he do that? Ari Hoenig plays melodies on his drums, with elbows and a lot of effort, learning hard on the skins to change their tones. With Phil, it’s much more subtle. You’re listening to the drums, he's playing the way he usually does, and suddenly you realize you’re hearing more than rhythms—you’re hearing actual notes. By the time you believe your ears, the moment has passed.
Improvised music is always new and never predictable. It's like watching Jackson Pollock splatter paint on a canvas, except as soon as the paint hits, it disappears, and if you try to remember what it looked like, you miss the  next part. Just as the musicians on the bandstand have to trust each other—there’s no score or book, often no plan except to play—you have to trust them. You open your ears and your mind. You watch, but mostly you listen, sometimes focusing on one sound (like the bottom hi-hat, or a low flutter from the saxophone), sometimes on the entirety of the sound, or as much as you can take in: a trickle, a stream, a wave, a bee or a swarm. As HH says, "The sounds connect in your head."

When it works, it’s exhilarating and deeply satisfying, as musical as a symphony. When it doesn't, which  happens, it can still hold your interest, like a dance or a play that doesn't quite gel. Last night worked. Pat Moriarty and Phil Hey, two old friends, two fine musicians, made magic. I hope they don’t keep us waiting years before they do it again.
____
To date, I've had conversations on improvisation with Douglas Ewart, Milo Fine, Stefan Kac, Adam Linz, and Pat Moriarty and Ellen Lease, all of which are available at mnartists.org or on this blog (see the Interviews list at the right). An interview with George Cartwright just went live at mnartists.org.
Photos by John Whiting.
Posted by Pamela Espeland at 5:24 PM