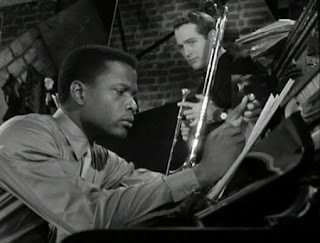 During my weekly Friday-morning talk with Ed Jones, host of the Morning Show on KBEM radio, he mentioned a film called Bell, Book and Candle, which features an underground jazz club with bongos.

Ed is an expert on jazz on film--more accurately, jazz in films, meaning Hollywood films, as opposed to documentary films about jazz (though he's probably an expert on those as well). In addition to hosting the Morning Show, he has his own special hour-long show each Monday at 8 p.m. called REEL Jazz, which is all about jazz in films and on Broadway.

Last October, he taught a REEL Jazz class as part of the radio station's Community Education series, during which he played and spoke about selections from Stormy Weather, High Society, a French film called Ascenseur pour l'echafaud (Lift to the Scaffold), with music by Miles Davis, Roger Vadim's Les Liaisons Dangereuses, Woody Allen's Sweet and Lowdown, Bertrand Tavernier's 'Round Midnight (starring jazz great Dexter Gordon), Alfie (scored by Sonny Rollins), Anatomy of a Murder (Duke Ellington), and more. It was a most enjoyable 90 minutes, a live version of his show, and we took away a long list of films to explore at our leisure, courtesy of the Jazz on Film website. Find it here.

Photo: A still from Paris Blues.
Posted by Pamela Espeland at 8:19 AM