Many music fans (and most jazz musicians in town) have probably heard by now that Cafe Maude in south Minneapolis will stop featuring live jazz as of March 1. It was one of the few places in town we could count on for improvised music played by top area musicians and interesting visitors. Maude, we'll still love your flatbread and grilled brussels sprouts and creative cocktails, but your music will be sorely missed. Although it's not over yet: on Friday, you can hear the Joel Shapira Quartet starting at 9.


More music for this weekend and into next week: 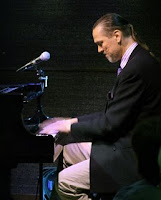 Jon Weber at the Artists’ Quarter
An affable, entertaining genius, pianist Jon Weber once claimed to know 20,168 songs. Today that number is probably on the low side. In a rare winter appearance in the Twin Cities (he’s a regular at our Jazz Festival each summer), he’ll pull who knows what from his bag of tricks—stride, straight-ahead, original compositions, tunes jam-packed with musical quotes—and he’ll tell you the birth dates of the composers.
9 p.m. Friday, Artists’ Quarter ($10).

Hollywood Cabaret: The 30s at the Black Box Theater, Bloomington Theatre and Art Center
The first in a series of three “Hollywood Cabaret” concerts in the intimate Black Box Theater celebrates the era of the great Hollywood musicals.
Arne Fogel, Maud Hixson, and Nichola Miller will sing and share stories about the songs. (Coming in February: movie songs of the 1940s. In March: songs from the Hollywood musicals of the 1950s and into the ‘60s.) With Tanner Taylor on piano, Keith Boyles on bass.
7:30 p.m. Saturday and 2 p.m. Sunday, Black Box Theater, Bloomington Theatre and Art Center ($18/$16). Box office 952-563-8575. 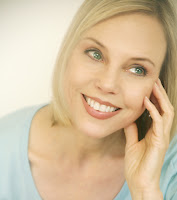 Connie Evingson and Tim Sparks at the Loring Pasta Bar
Connie Evingson can sing anything from standards to Gypsy jazz, songs of the Beatles and Dave Frishberg, with authority, presence, and easy swing. Her voice is simultaneously silky and smoky. Tim Sparks is a phenomenal fingerstyle guitarist whose recordings include Tchaikovsky’s Nutcracker Suite (played entirely on guitar) and “Radical Jewish Culture” outings for John Zorn’s Tzadik label. Sparks recently moved from northern Minnesota to a southern suburb, so here’s hoping we’ll see and hear a lot more of him. This is part of the Pasta Bar’s “Music Mystique Dans La Chambre Rouge” series featuring area vocalists.
7 p.m. Monday, Loring Pasta Bar, no cover.
Roberta Gambarini at the Dakota
The late, great pianist Hank Jones called her “the best since Ella Fitzgerald.” James Moody was her mentor and admirer. Since coming to the United States from Turin, Italy in the late 1990s, Roberta Gambarini has become a singer’s singer, heiress to Ella and Sarah Vaughan and Carmen McRae. She has a gorgeous voice, impeccable diction (remember, she grew up speaking Italian), she knows her jazz history, and she scats superbly.
7 and 9 p.m. Monday, Dakota ($25/$20). Tickets 612-332-5299.
Meditations and Revelations: The Music of Charles Mingus at MacPhail
Funded by a grant from the NEA, MacPhail’s jazz coordinator Adam Linz has programmed a series of concerts by American jazz composer and bassist Charles Mingus. This is the third in a series of four, with the fourth scheduled for May 12. The first two were full of surprises and seldom-heard music, played with passion and commitment and a sense of fun. Linz has invited musicians he knows to join him in these musical explorations. Thursday’s concert, titled “Something Like a Bird,” will feature a nonet: Linz on bass, Bryan Nichols on piano, Michael Lewis, Chris Thomson, and Dave Karr on saxophones, Greg Lewis on trumpet, Scott Agster on trombone, Stefan Kac on tuba, and JT Bates on drums.
8 p.m. Thursday, MacPhail Center for Music ($10/$5). Pre-concert Q&A with the artists at 7 p.m.
REGULAR GIG
Speaking of the Loring Pasta Bar, Dan Newton's Cafe Accordion Orchestra plays there every Tuesday. Led by accordion master Newton, a.k.a. Daddy Squeeze, this marvelously musical band--mandolin, violin, bass, guitar, percussion, and vocals--delivers Gypsy swing, waltz, tango, and Latin rhythms. Yes, there's a dance floor. A guaranteed good time. 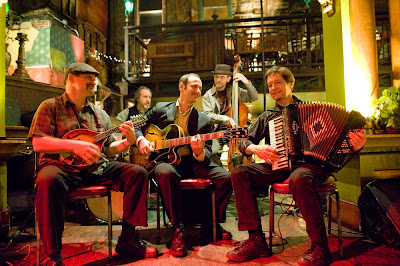 Posted by Pamela Espeland at 9:00 PM