Matthew Shipp to perform at the Loring Theater on February 4 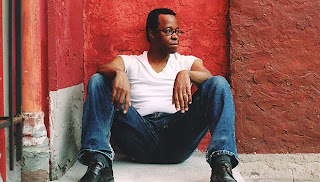 Has the avant-garde pianist Matthew Shipp ever played in Minneapolis? Not in my memory. Only once before, in 1998 (thanks, Scott). When he makes his debut here returns on February 4, will he be at the Dakota or the Walker, the Cedar or the Artists' Quarter? No, at the house that hosted the comedy Triple Espresso...for twelve years.

Dare we hope that that these two engagements--the inventive, Coltrane-meets-Nashville Trucking Company (who flew in Chris Speed) and the provocative, take-no-prisoners Shipp--signal a conscious effort, perhaps even a commitment, to program the edgy and exciting as opposed to the standard and safe?


According to the venue's website, Shipp will perform songs from his latest release, The Art of the Improviser, which won't even be out yet (it's due February 11). This will be a solo piano show. Because we live in an artsy town, it's up against some big guns: John Scofield at the Dakota, Kronos Quartet at the Walker, and area favorites Nathan Hanson, Brian Roessler, and Peter Leggett at the Black Dog, Atlantis Quartet at the Artists' Quarter, and the James Buckley Trio at Maude, among others. So it won't be an easy choice, but it's a choice we wouldn't have had before now.

What's next, Loring Theater? A lot of people would love to see Vijay Iyer play here. Or what about the Vijay Iyer/Craig Taborn duo that played last October at Columbia University? Or Rudresh Mahanthappa's Indo-Pak Coalition. Or the trio Fly. Or Fat Kid Wednesdays, now that the Clown is just another basement. I understand you can't be a full-time jazz venue--it seems that nobody can these days--but something fresh once a month would be awesome.
Posted by Pamela Espeland at 9:35 AM