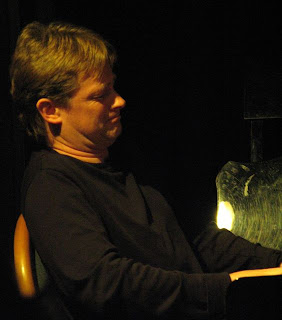 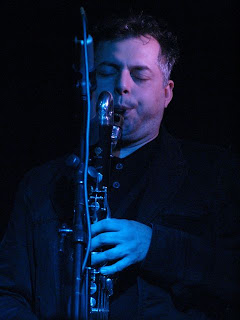 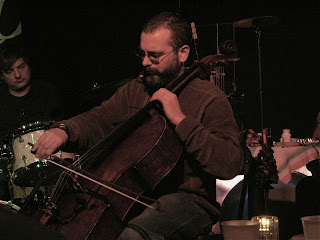 After previewing this show for MinnPost and reading Britt Robson's glowing article about in the Strib (which I would gladly link to here, except you'd have to pay to read it after three weeks) and Andrea Canter's piece on Jazz Police, I expected a crowd. In fact, it was SRO at the AQ, something that doesn't happen nearly often enough. Much of the audience was other musicians. Laura Caviani, Pete Whitman, Mary Louise Knutson, Phil Aaron, Chris Lomheim and his wife, Emily, Lucia Newell, James Buckley, Michael Lewis, Chris Olson, Mac Santiago, Miguel Hurtado, and Javier Santiago were all there—and those are just the ones I saw. We tried to imagine who was left to play piano gigs around the Twin Cities that night. Peter Schimke was at the Dakota; he came to the AQ after. Tanner Taylor must have been all over town.

Carrothers' Armistice 1918 suite was even more powerful in person than on the recording. We journeyed through optimism, death, and despair. While I love the more traditional piano-bass-drums trio, the other instruments—Turner's eloquent cello, Foltz's expressive clarinets, Epstein's limitless percussion array (which included a tart pan, beans in a bowl, goats' toenails, what looked like vacuum cleaner hoses, and something he later told me is called a Remo Spring Drum)—added great texture and dimension. And Peg's voice rose pure and clear above the music, even when it was buzzy and dark. Her version of "I Didn't Raise My Boy to Be a Soldier" was devastating.

As an encore, they gave us "And the Band Played On" in a spooky David Lynch version. It was perfect, and in response, we gave them a standing ovation. Which was small thanks for a concert so epic and virtuosic and satisfying that it should have commanded and filled a much larger space. I heard the band had approached other venues and been rejected; Armistice 1918 was judged too old-fashioned, too anti-war, irrelevant. I heard the Walker turned them down. I recently read an article about a dance series at the Walker (again in the Strib, sorry, no link) in which performing arts curator Philip Bither said, "We consciously did not want to go back. These are the artists you see in the future." Maybe to Bither, programming Armistice 1918 would have meant "going back," but to those of us who sat still and silent, taking in as much as we could, it was about as modern and immediate and forward-looking as music can be.

Bill Carrothers' Web site is the only place you can buy much of his music including Armistice 1918.