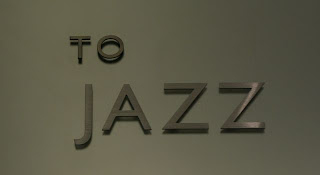 In our final class (for now) with Kelly Rossum at MacPhail, we returned to the question he asked at the start: What is jazz? We talked around it as people who hadn't been at last week's class described performances they had seen; the assignment for that class had been to go hear some jazz. Then we veered into a discussion about the future of jazz and what that might bring.

Not for the first time, Kelly said he feels jazz is tied to technology, and technology will be important for advancing the music. On the other hand, one of the problems of technology is "you can listen to a thousand songs and never hear any of them." As David Berkman and Scott Wendholt said during their master class at MacPhail, it's important to fixate: to listen in a focused, concentrated way if you really want to hear. Pick an album, a whole album, and listen to it again and again. Then do the same with another album. Kelly did this with Miles Davis's 'Round About Midnight, and Wynton Marsalis's J-Mood, and Donald Byrd's Live at the Half Note Cafe.

Meanwhile, jazz.com, the major new jazz Web site that launched this week under the direction of Ted Gioia, author of The History of Jazz (and brother to NEA chair Dana Gioia), is publishing reviews of individual tracks, not whole albums/CDs. Each day, they publish a "Song for the Day" review of a track from a new CD. "A Classic Revisited" reviews a track from a classic jazz album. A section called "The Dozens" lists, for example, 12 essential Brad Mehldau performances, or 12 essential modern jazz trumpet solos, or 12 tracks by jazz organ trios. Click on BUY THIS TRACK in any section and you'll find yourself on amazon.com, where you'll have to buy the whole CD after all. But it's very modern of jazz.com to focus on tracks. As Chris Reimenschneider wrote last week in the Strib, "If we're to believe SoundScan, Apple, teenagers and Mark Wheat, the full-length album is a dying art form."

Yet people keep making them. Christine Rosholt will record a new CD next week at the Dakota. Mary Louise Knutson is writing songs for her next CD. And Kelly ended our class by previewing Family, his new quartet CD with Bryan Nichols, Chris Bates, and J.T. Bates, due out later this year. We heard "If I Were a Bell," Kelly's utterly charming original "Mr. Blueberry" (he calls it "my first country song," and it makes you want to dance, but not line dance), and "After the Snow," a tune that was almost wholly improvised in the studio and recorded on the first take. It began as an eight-note melody, the same two notes played four times, and opened wide into one of the most beautiful things I've ever heard. How can two notes turn into something so exquisite? As Kelly said, "It's about the people." Which may be the real definition of jazz, and it's certainly the future of jazz.

Photo: The sign on the wall by the elevators at Jazz at Lincoln Center.
Posted by Pamela Espeland at 1:45 PM