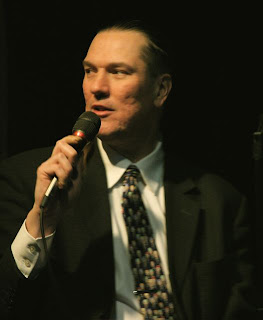 Weber is one of my favorite piano players. Self-taught, he can play anything, and he seems to know everything about music. He has perfect pitch and total recall; by age 6, he had memorized 2,000 standards from his grandmother's piano rolls. He's a riveting performer, a brilliant composer, and an imaginative improviser. Why he isn't more famous is a mystery. Maybe he's just too scary smart in a profession that requires more brains than most people realize.

Weber splits his time between New York and Chicago (six days a week in NYC, one day in the Windy City) and rarely comes to Minneapolis/St. Paul except for the annual Twin Cities Jazz Festival in June, where he's a beloved regular. This weekend, he played a private event in Minneapolis on Saturday, leaving Sunday free for the AQ.

Because Sunday was Jerome Kern's birthday (Weber appears to know—and quite possibly really does know—every composer's birthday, date and year, and when every song was written, and what movie or musical it came from, if it did), the first set at the AQ was devoted to the music of Jerome Kern: "Long Ago and Far Away" (from the 1944 musical Cover Girl), "Nobody Else But Me" (a tune Gordy Johnson recorded on his Trios Version 3.0 CD), "All the Things You Are," "The Song Is You," "I'm Old Fashioned" (from the movie You Were Never Lovelier), and "Old Man River" from the musical Showboat.

But that's not all we heard. Like most jazz artists, Weber never plays just one tune. Between statements of the melody (so we have some clue what we're hearing), he improvises. And Weber's improvisations are wild rides through pretty much everything musical. All jazz artists quote from other songs, but with Weber, the quotes are so diverse and they go by so fast you've barely figured one out before he's already three ahead. It's as if each improvisation is an opportunity for Weber to mine the vast and astonishing wealth of music in his head, and he does it at warp speed. I found myself holding my breath so I wouldn't miss a thing.

A lot of things I recognized but couldn't name flew by. A few I could: Bits of Mozart (Weber calls him "Zart;" the 27th was his birthday, too) from "Eine kleine Nachtmusik" and more. Snippets of "Hooray for Hollywood" and "Chicago" (that toddlin' town). John swears he heard a phrase from an old Woolite jingle ("You'd look better in a sweater washed in Woolite"). Nothing was off limits and it all fit.

Between tunes, Weber talked, filling us in on what he had just played and preparing us (sort of) for what was to come, peppering us with facts and stats and stories. "Here we are in the second century of jazz," he said, "and you don't know what you're going to get.... It's the flying trapeze jazz act without a net."

The second set left Kern behind and chased the rest of jazz: "Swanee" (stride style), James P. Johnson's "Worried and Lonesome Blues" (Weber: "Someday I'm going to dedicate a whole show to songs with 'and' in the title.... 'You and the Night and the Music' will be a double"), "I'm Beginning to See the Light," Oscar Peterson's "Riff Blues," "Alone Together," "Very Early" (written by a 19-year-old Bill Evans), Charlie Christian's "A Smooth One," and "Sonnymoon for Two" by Sonny Rollins. 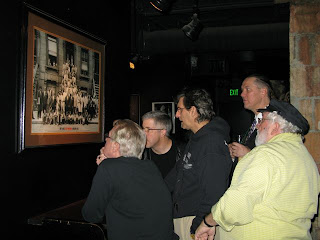 Introducing "Sonnymoon," Weber mentioned that Rollins was one of seven surviving jazz artists in the famous "Great Day in Harlem" photograph taken by Art Kane in 1958, a copy of which hangs on a wall at the AQ. Weber named six survivors but couldn't come up with the seventh, so after the set he and Kenny Horst and Davis Wilson and a few others gathered around the photo to try to figure it out.