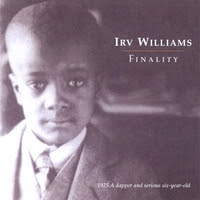 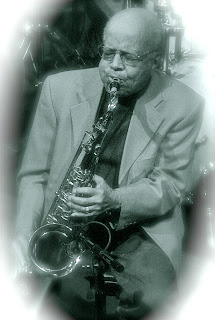 At 88, Irv Williams (a.k.a. "Mr. Smooth," but certainly not because he plays smooth jazz) has released a new CD. He called it Finality which just makes people roll their eyes. Williams is the Energizer Bunny of jazz without the dorky drum. We caught the first set of his CD release at the Dakota, where he and his trio celebrated with standards: "Wrap Your Troubles in Dreams," "In the Wee Small Hours of the Morning" (a melody that makes me vow never to travel anywhere without my husband again), a spry, snappy reading of "I Thought About You," "Old Folks" (what Irv calls "my theme song"), "Come Rain or Come Shine." The downstairs was full, the crowd was devoted, and Williams' sax was warm and velvety.

Introducing his new CD, Williams pointed out the image on the cover: himself as a six-year-old child. Due to the age of the photo, it needed some restoring. He also mentioned he'd been born prematurely, a much bigger problem in 1919 than it is today. Then he told us he had his pen out and was ready to sign. He stayed on stage during the break and people got in line.

Read about Finality, listen to bits of each track, and maybe order yourself a copy.
Still my favorite Irv CD.