Notes from a Master Class 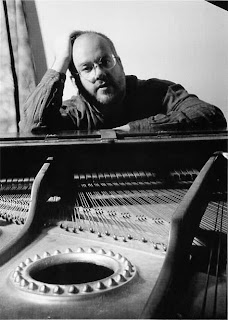 When: 1/8/08
Where: MacPhail Center for Music
Who: David Berkman (piano), Scott Wendholt (trumpet)

Prior to their concert in the new Antonello Performance Hall at MacPhail, a jewelbox of a venue, pianist David Berkman and trumpeter Scott Wendholt gave an hour-long master class/jazz clinic. They began by playing a 12-bar blues, then spent most of the rest of the time telling stories and anecdotes, talking about how they play together, and discussing their influences. Here is some of what we heard. (I'm also including a few quotes from the concert, which became an extension of the clinic, only with more music.)

David Berkman: One of my goals as an improvisor is trying to play something really wrong against the form and seeing if anything good comes out of it.
***
Scott Wendholt: Jazz is entirely idiosyncratic music.
***
DB: Freedom and tradition are kind of the same thing.
***
SW: There's always more to [jazz] than I thought.... There is no end to it.
***
DB: You think you know it but there's always something else to hear and learn.... Everything you learn you can reuse.
***
SW: It's good to hear lots of music, but it's important to fixate. Give something hundreds of listenings. Take one record at a time and go crazy with it until you can sing along with the most important moments.
***
DB: What inspires me as a composer is trying to change the process.
***
SW: A really good way to write a song is to find a song you really like and write one a lot like it.

Scott's influences: Miles Davis. "The whole history of his music." And: "Trumpet players, check out any Art Blakey band."

The first record Wendholt listened to over and over again was Jean-Pierre Rampal and Claude Bolling's Suite for Flute and Jazz Piano Trio (1975). I can still hum the opening notes to that album...and I still have the album, as in LP, which is pretty beat up by now.

Berkman told us how, during a tour of Japan that involved a lot of riding on trains, he gave drummer Nasheet Waits a Tony Williams CD and Waits listened to nothing else for three days. When he gave it back, Berkman said he could keep it, and Waits said no thanks; he had learned everything he could from it.

I'm inspired to choose a few CDs and listen to them very carefully, and I think I'll begin with the Berkman CD we bought last night, which just happens to be titled Start Here, Finish There (2003).

Photo of Berkman from his Web site gallery.
Posted by Pamela Espeland at 8:58 AM