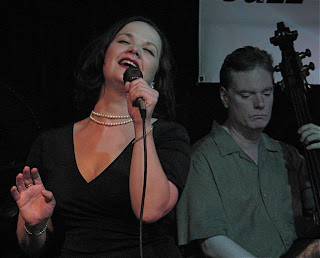 I like Christine Rosholt personally and as a singer. We were trying to remember when we first met; she thinks it was when she was walking behind John and me in the skyway to Orchestra Hall for some event and she overheard us talking about Kurt Elling.

It was fun to interview her for this week's MinnPost article, a preview of her upcoming live CD recording at the Dakota. I learned a little of what she had done before she became a jazz vocalist:

"My degree is in performance art and photography [from the School of the Art Institute of Chicago].... I used to combine photography and theater in performance pieces, multimedia with photography projections; I did shows in New York, tons of show in Chicago, and a lot of independent hole-in-the-wall theaters.... I've done a lot of crazy ass performance art, and I'm so glad I got that out of my system."

Photo: Christine and bassist Tom Lewis at the Jazz Vocalists of Minnesota CD Release Party, the Artists' Quarter, July 15, 2007
Posted by Pamela Espeland at 8:57 AM