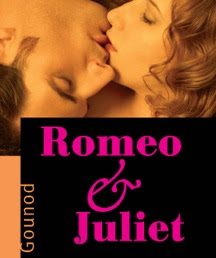 When: 1/29/08
Where: The Ordway
Who: The Minnesota Opera with James Valenti as Romeo and Ellie Dehn as Juliet

To sing opera requires the ability to sing opera, and if a singer is also attractive and not too old or fat, traditionally that has been a bonus. But today looks are everything, or almost everything, so it wasn't surprising when the Royal Opera House, Covent Garden sacked soprano Deborah Voigt from her signature role in Ariadne auf Naxos because she couldn't fit into a cocktail dress (and hired her back after she lost 150 pounds). And it's not unusual that the Minnesota Opera is promoting its own production of Romeo and Juliet as featuring "two of opera's hottest stars."

The posters (like the one above) are meant to be steamy, and in a video ad I saw on the Strib's Web site, the dishy Valenti looks into the camera and says "I'm your Romeo" while the words "Sexy," "Riveting," and "Spectacular" appear below. Rohan Preston's preview for the Strib (which I would link to if the Strib were the New York Times) is titled "Beauty over beast," and in a video on the Strib site, Minnesota Opera artistic director Dale Johnson's first words are "The cast is full of bee-yoo-ti-ful young American singers.... Valenti is a tall, dark, and handsome tenor."

So, how's the opera? Pretty good, kind of weird, too long. I wish they had trimmed some fat from the first two acts. I wasn't familiar with the music (usually I know at least one aria from an opera) so it all kind of ran together for me over three hours with two intermissions. The sets—buildings and parts of buildings that rumbled back and forth, with projections of statues, water, clouds, and candles—were initially interesting, ultimately distracting. I didn't get the dancers in their gauzy dresses and mannered poses.

Valenti and Dehn are both wonderful singers, but there isn't any chemistry between them. Dehn's costumes added random tension to the production; more than once it looked as if she might fall out of her dress, and if there's anyone who should not scamper across the stage wearing a low-cut gown, it's Dehn. The staging of the bedroom scene was in questionable taste. Dehn showed too much cleavage, Valenti wore a nightshirt over naked legs, they rolled around on rumpled sheets and pillows, and I'm sure the people sitting at stage right saw a lot more than we did at stage left, making me even more grateful for the seats we had.

But I liked it. I've liked opera since a distinguished visiting professor from Amsterdam took me to see the Metropolitan Opera perform the double bill of I Pagliacci and Cavalleria Rusticana at Northrop Auditorium back in the day when the Met came to town. As the final curtain fell, I turned to say thanks and saw he had tears streaming down his face. I knew then there must be something to this wildly excessive and histrionic art form. I hope I hear Valenti sing again someday, and Dehn too, in more flattering clothes.

Posted by Pamela Espeland at 8:12 AM