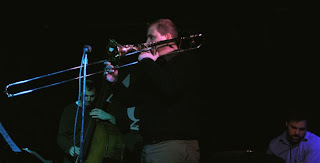 Brad Bellows says the trombone is not becoming more popular, but it seems that everywhere I turn these days, I run into a trombone (or one almost runs into me, if I sit too near the stage). Valves Meet Slide, the Dakota Combo with Delfeayo Marsalis, last year's Trombone Summit at the Dakota (Steve Turre, Fred Wesley, Wycliffe Gordon, guest Delfeayo...that was in June, a while back but so worth mentioning)...also in June, we went to the Stone in NYC and saw Chris McIntyre's 7X7 Trombone Band with (for real) 7 trombones and it was not too many.

We caught them at the AQ on a Thursday night. The crowd was sizable and appreciative, and the music was satisfying: "The Juggla," a straight-ahead piece by Ralph Peterson the group first heard on an Anthony Cox CD and have since made their own; Miller's "Salt of the Earth," the tune Kelly Rossum played for us during our Jazz 101 class and proclaimed his current favorite; a tongue-in-cheek, reggae-flavored "Whatever Lola Wants, Lola Gets." And just when I thought I had them figured out (SH is all about fun!) they gave us a beautiful ballad by Miller. He wrote it in 2000, the year two people dear to him passed away: his father and his trombone hero J.J. Johnson. "For J.J." is a work of aching loss. I've never heard a trombone sound so sad.

From there we heard a Magraw tune, "Anarchy," and "I Hear a Rhapsody." The first set closed with something Miller called "Fantasy in A minor, for lack of a better title." A big, serious piece.

The next day, Chris Bates sent an email saying "I think you heard some of the best music that Slide has ever played."

Photo by John Whiting. That's Miller in front, with Chris Bates at the left and J.T. at the right.
Posted by Pamela Espeland at 4:53 PM