Hats for Cats: Michael Lewis and his mom 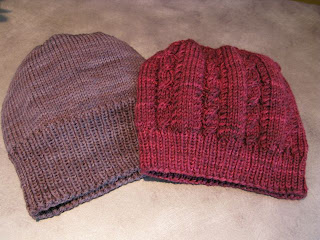 Michael Lewis plays the saxophone like no one else I've seen or heard. I've seen him perform live many times—with Happy Apple, Fat Kid Wednesdays, in various other configurations around town at the AQ, Cafe Maude, and more. At Fat Kid's performance with the Moroccan group B'net Houariyat during the 2006 Minnesota Sur Seine music festival, his hat kept falling down over his eyes while he played. He'd push it up during split-second breaks between flurries of notes, but would fall again when he moved, and he moves a lot.

It made me itch. It made me squirm. It made me want to make him a hat. So when I saw him at Maude in early January, standing outside smoking during a break, I offered and he said yes. His mom Mary was there so I made one for her, too.
Posted by Pamela Espeland at 9:52 AM