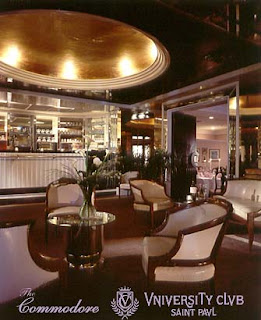 I used to hang out at the Commodore Hotel in St. Paul, which has a fabulous Art Deco bar and a literary history: F. Scott Fitzgerald once lived there with his wife Zelda and their new baby girl Scottie, as did Sinclair Lewis. I thought drinking gin in such a setting might inspire me to write a novel but apparently that's not how it works.

Following a fire and gas explosion in 1978, the Commodore was remodeled into condos and offices. It is now owned by the University Club of St. Paul, which means no more public access except for special events. One of those happens on Tuesday, June 10. As part of the Schubert Club Summer Song Festival, singer Judi Donaghy will pay tribute to the vocal legends of swing. That concert is the topic of this week's MinnPost column.

Photo of the Fitzgerald Bar at the Commodore Hotel from the University Club's Web site.
Posted by Pamela Espeland at 7:59 PM