Judi Donaghy's Tribute to the Vocal Legends of Swing 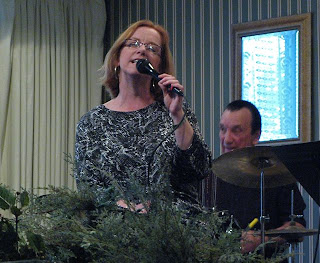 Donaghy's performance is part of the Schubert Club's Summer Song Festival, a week-long series of mostly classical evening performances. Billed as "Our Jazz Connection!" this night is the only one devoted to jazz. Appropriately, the event is held at the Commodore Hotel in St. Paul, former hangout and home of F. Scott Fitzgerald, voice of the Jazz Age.

It's an unusual venue—a small ballroom with a stage in one corner and multiple photographic challenges: striped wallpaper, a big window letting in natural light, a wall around the stage, foliage behind the wall, mirrors. But the sound is good and it's a sold-out crowd. 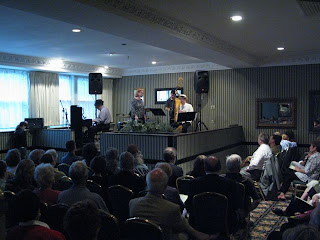 This is the first time I've heard Donaghy sing. And she can really sing. Her bio on the McNally Smith College of Music Web site (she heads the voice department there) lists her areas of expertise: opera, musical theater, jazz, folk, country, gospel, pop, and R&B. She also writes songs, and she performs with Bobby McFerrin's Voicestra. I've been madly in love with McFerrin since I first heard him sing The Wizard of Oz—the whole movie—in just eight brilliant, manic minutes. If you have three minutes and forty-five seconds, listen to Kurt Andersen's interview of McFerrin (with Oz snippets).

Tonight Donaghy is singing songs recorded by Ella Fitzgerald, Nat King Cole, Sarah Vaughan, Frank Sinatra, Billie Holiday, and Joe Williams. "I Can't Believe That You're in Love with Me," "You Go to My Head." The band looks as if it has stepped out of the 1940s, and the venue contributes to the overall Wayback Machine feel of the event.

Maryann Sullivan, host of Minnesota Public Radio's "The Jazz Connection" (and Haining's wife) is here; so is singer Maud Hixson (who's married to Carlson), who came with singer Rhonda Laurie. One thing that makes this community such a strong place for jazz is the support musicians give to each other. 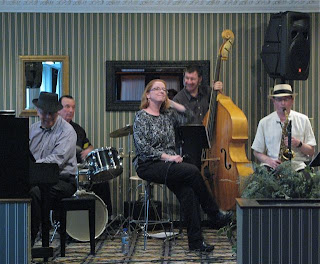 I like Donaghy's version of Joe Williams's "Every Day I Have the Blues" very much. She has a big voice, she knows what to do with it, and she really swings. All around me, feet are tapping and heads are bobbing, even in a crowd one could describe as staid without overstating. (It is, after all, the Schubert Club.)

Donaghy's band is smooth and playful. Carlson tosses off quotes, Pikal grabs and slaps his bass, Haining wails, Bortolussi smiles. Donaghy sings "Please Send Me Someone to Love," a song she clearly enjoys and gives 110 percent. Then "Sentimental Star," a song she cowrote with Carlson. She introduces it as "an audition song...the first jazz song I ever wrote...thankfully it was fixed by Rick Carlson and I got the job." You can hear it on Sing or Swing, a CD she recorded with the Wolverines.

Donaghy credits the Wolverines for the jazz part of her career. "I was never all that interested in jazz as a youngster," she tells us. "I didn't grow up in the jazz world. The first jazz group I sang with—in Lincoln, Nebraska—was not very exciting. Then after living in Minneapolis for a few years, I stumbled on a concert with the Wolverines Big Band and [vocalist] Shirley Witherspoon. My jaw dropped and I said to myself, 'I have to sing this kind of music.' I started going to hear the Wolverines and just listened, and then I started singing. Now I can't get enough of it and I want to sing swing all the time."

I'm surprised when Donaghy announces a break. It's 8:30, the show started at 7, and I'm hungry. Also plenty satisfied with what I've heard. So we go to W.A. Frost and sit on the best restaurant patio in the Twin Cities, drinking martinis and eating crab cakes and coconut risotto.

Posted by Pamela Espeland at 11:00 AM