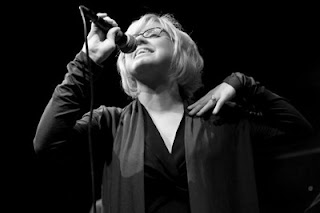 There's been buzz about Sophia Shorai for some time. I think I heard Leigh Kamman rave about her a while back on his radio show The Jazz Image, and Tanner Taylor wants to record with her, and she's versatile, singing jazz standards and pop tunes and Latin classics. She made a Target commercial singing the Beatles' "Hello Goodbye," which I remember hearing. So when I got an email from her "devoted fiance and volunteer" (and sometime performing partner) Jeremy Gordon inviting me to her upcoming gig at the Times, I went.

She's here with a good band. Harris and Hennig are with the Atlantis Quartet, a group we saw earlier this year at the doomed Rosewood Room. I'm always happy to see Chris Bates at his bass.

I like Shorai's voice a lot. It's very pretty, sometimes little-girl, sometimes breathy, sometimes tough, reminiscent of Stacey Kent but not derivative. She sings a nice mix of standards, opening with "It Could Happen to You," a challenging tune with big intervals that probably should come later in a set. "Love Is the Saddest Thing" follows with lots of swing and jazzy phrasing. Then a blues? It's difficult to understand Shorai when she speaks, which isn't entirely her fault, given the setting. The Times is generally noisy, more so on a Saturday night, and even worse when a sudden downpour drives the sidewalk crowd indoors.

"Gee Baby Aren't I Good to You" is sassy, and she opens a flirty "Tea for Two" by singing the verse, which I have seldom heard:

I'm discontented with homes that are rented so I have invented my own.
Darling this place is a lover's oasis where life's weary chase is unknown.
Far from the cry of the city, where flowers pretty caress the streams,
Cozy to hide in, to love side-by-side in. Don't let it abide in my dreams.

The rest we know:

Picture you upon my knee, just tea for two and two for tea...

For this tune Shorai uses her little-girl voice with grown-up phrasing and a feathery vibrato. ("I learned that one from Blossom Dearie," she attempts to tell the yammering crowd.)

"Black Orpheus" is a gently swaying samba, one of the songs on her 2004 CD Wave. On "Don't Get Around Much Anymore," she starts high and nails it, showing off her range (and a bit of a lisp). The set ends with two more standards, "I Wish I Knew Someone to Love Me" and "Do I."

I'd stay to hear more but by now I'm fed up with the Times. The bar also has a dance floor, and normally it's kind of nice to see people get out there and dance, but tonight, in addition to the escalating crowd noise, there's an especially annoying pair of dancers who spend most of the evening directly in front of us. Whenever we try to snap a picture they wiggle into the frame.

Shorai has a Dakota date on July 28 and I've put that on my calendar. The photo above was taken there earlier this year, in May, by whom I don't know; I found it on Shorai's MySpace page.
Posted by Pamela Espeland at 1:11 PM