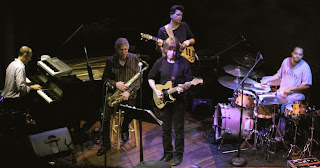 I came to jazz through the fusion door, took a hard left at Thelonious Monk, and never really looked back. I like Bitches Brew and Head Hunters and Heavy Weather but those are all from a long time ago. I don't listen to fusion much these days and I'm probably just ignorant about it but there it is. 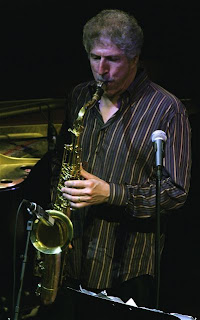 Although I hadn't planned to see the Yellowjackets again (the first time was January 2003), they are iconic so I went. Also, Kurt Elling has recorded with this band (two tracks on their 1998 release Club Nocturne), which gives them bonus points. This time they brought guitar god Mike Stern (whom Mintzer called "the fifth Yellowjacket" more than once during the set). Stern played with Blood, Sweat & Tears in the 70s, then Miles Davis in the 80s and later Michael Brecker. He still wears his hair in a shaggy cut that brings back fond memories of the Dave Clark Five and Herman's Hermits. 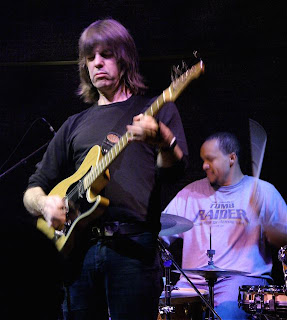 I'm not familiar enough with Yellowjackets music to know what they're playing unless Mintzer tells us, which he sometimes does: new tunes called "Yahoo" and "Lifecycle" (from their new CD with Stern, also called Lifecycle), "We're With You" (a ballad by Stern), "Revelation" (from Shades, recorded in 1986). Stern reads charts for most of the set, which is no big deal. Recording a CD in the studio is different from playing it live in front of an audience, which John Hammond (Jr.) explained when he toured for his CD of Tom Waits tunes, Wicked Grin. Hammond had to memorize the songs before he could take them on the road.

Everyone in the Yellowjackets plays really well. Tight and together. The music is jazzier than I expected but still fusiony enough that I kind of lose interest. Toward the end of "Revelation," they all cut loose and it's smokin', as the cats say, but too late for me. Plenty of other people in the audience are going crazy for the music and I'm glad for them and the band. My mind wanders, returning most often to Baylor and his drums. Baylor has also played with Kenny Garrett (Happy People) and Cassandra Wilson (several tracks on Traveling Miles). I like his "Tomb Raider" T-shirt. 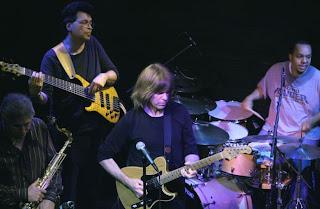 During the encore, a high-energy piece, Stern quotes Monk's "You Needn't." And there's that hard left again.

Photos by John Whiting.
Posted by Pamela Espeland at 11:28 PM