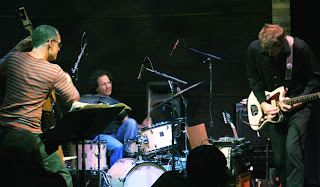 Previewing this show, Tom Surowicz wrote for the Strib: "Long before he pop-rocked the world in Wilco, California guitarist Nels Cline was well-established on the more avant end of the jazz spectrum, recording with the likes of Tim Berne, Julius Hemphill and his twin brother, Alex Cline. He's always been a jazz/rock switch-hitter.... He'll make his Dakota debut with the Nels Cline Singers, a hard-driving, gnarly fusion trio with no vocals, but plenty of splashy drumming by Scott Amendola."

"Singers" with no vocals? Pop rock avant jazz? Sure, why not, let's go. (Even though I have just one Wilco song in my collection, and I only have that because it's on a Harry Smith anthology someone gave to me.)

This is a band that loves electronics. For the first song or two, Amendola doesn't touch the drums; he's bending around behind them turning buttons. Strange flying-saucer sounds come from Hoff's bass and Cline's guitar. The music crescendos, full of static and wind. Four chords are repeated over and over. 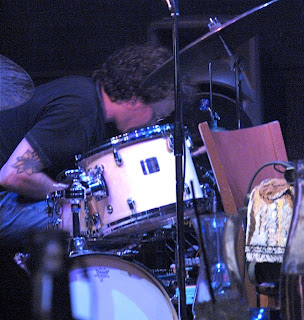 When Amendola decides to start drumming, he enters with a big BAM BAM BAM. Cline strokes his guitar strings with what looks like a wire whisk. It's heavy-metal head-banging music and a lot of fun. 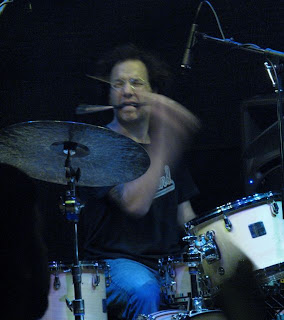 Get a taste here—this is not my video but similar to what we heard last night:

Bevan, my friend, you would not have enjoyed this.

Next up, Andrew Hill's "Dedication" from Point of Departure. "As most of you know," Cline writes on his Web site, "I love [Hill's] music. I recorded some of his pieces on my CD, released last year, called New Monastery: A View into the Music of Andrew Hill. I recorded it as a tribute to a LIVING MASTER and inspiration." Over the past year, I have started to explore Hill's music. I like how Cline describes it: "visionary, unpredictable, wide-ranging in approach, loose-limbed yet articulate, and...much like the man: beautiful and free." Hill was posthumously named a NEA Jazz Master in 2008.

Digressing: What will happen to the NEA Jazz Masters awards ceremony now that IAJE is defunct? Will it be brought into the JazzImprov conference?

Cline sets up a tune called "Confection" as "so very sweet" when in fact it's so very LOUD. Afterward, someone in the audience says, "That piece hurt my ears." Not missing a beat, Cline says, "That's because I added too much treble. As Charlie Haden told me when I played with him in the 80s, 'Treble is trouble.'" 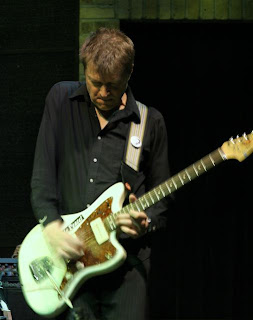 "One Down, One Up" is a tune by Coltrane but it's not one I know so I can't tell how far afield Cline and his group take it. "Exiled" is a ballad, seemingly randomized but nice. Mellow.

Earlier Cline shares some of "the horrors of travel." New restrictions (and rising costs) mean he can no longer tour with the many guitars he plays (for example, on the first Singers CD, Instrumentals, these include numerous electrics, a 12-string, and a baritone guitar). He's rueful about not having them along. He does have two tonight, a white one he brought with and another he bought yesterday at Willie's Guitars in St. Paul. Hoff's upright bass is also a recent purchase; it's all neck and strings, no body. 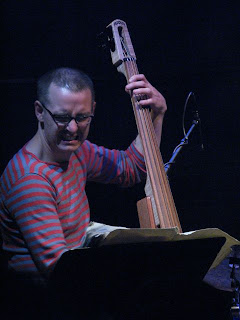 The closest thing I've heard to this kind of music before was a concert at the Walker with Dave Torn. I wouldn't attempt to compare the two but I liked this better. More rock-and-roll than jazz but I heard some good guitar playing tonight, good bass playing, good drumming. Energetic, inventive, emotional, risky. I'm satisfied. 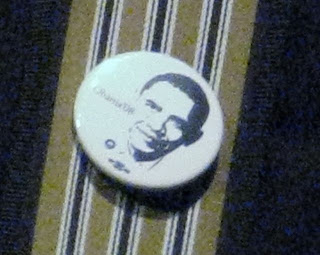 Posted by Pamela Espeland at 4:50 PM