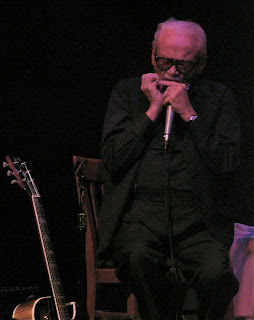 He last came to the Dakota in April 2006 with his good friend and frequent touring partner, pianist Kenny Werner. Toots was about to turn 84.

Seeing him live is an unforgettable experience. Like being showered with gifts by someone who loves you and every gift is just what you want. Like sitting somewhere with a beautiful view and the sun warming your face. Like understanding that life is a mix of the sweet and the bitter and that's how it's supposed to be. Impossibly corny? Can't help it. I adore Toots.

Notes and the playlist from that evening in April 2006:

Toots opens by saying, "I got the jazz virus during the German occupation. I got infected." [He was born in 1922 and would have been 19. His family fled to France, then moved back home when the Nazis occupied that country.]

(1) "Summertime." A song I've heard a thousand times but never like this.

(3) "Autumn Leaves." Toots says, "When a musician doesn't know what to play, he certainly will play 'Autumn Leaves'."

(4) "Tender is the Night," a Jimmy Van Heusen theme. Lush and nostalgic. Kenny Werner is playing lots of electronic keyboards tonight, with sustained chords and reverb.

This is jazz that makes you want to kiss the person you're with, not out of desire or need but out of generosity. After this tune, Toots gives the thumbs-up to Kenny.

(5) Herbie Hancock's "Dolphin Dance." Toots tells us he hired Herbie before he [Herbie] went with Miles, 43 years ago; he was recently Herbie's guest of honor at Carnegie Hall.

(6) "No More Blues." Sometimes music is the one thing you can count on to deliver no more blues.

(7) Jobim's "Wave." Toots says, "There is more than osmosis between Brazil's music and the jazz evolution." He names some of the people he has played with over the years, then says, "And now I'm practically married to Kenny Werner." The evident affection between them is part of what makes their performances remarkable and memorable.

(8) Bill Evans' "Time Remembered." Music so beautiful I want to weep. Kenny plays a lovely solo; Toots puts his hand on his heart and smiles.

(9) Irving Berlin's "God Bless America" mixed with something by Nasciemento. Toots became a naturalized American citizen in 1957, and he's proud of it. "I came for the music and got to play with my idols," he says. And now it's the other way around. 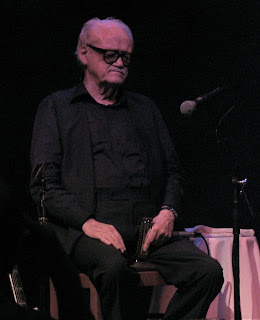 I wondered how Toots came by his nickname. I found the answer in an interview he gave to Les Tomkins in 1978:

"It happened way back in Belgium, in 1946. We had a little amateur band, called Le Jazz Hot, and I was the up-and-coming fellow playing the guitar in Belgium. You know, I was playing like Django Rheinhardt, Charlie Christian—a combination of whatever was played then; it was just before the advent of bebop, I would say. But my name, Jean Thielemans—that doesn’t swing at all. Names on the scene at that time were Toots Mondello, who was with Benny Goodman, and the arranger Toots Camarata; so they said: 'That’s it—Toots.' I said: 'Okay, why not?'— it started like that, and it stuck. It’s been a lucky label, I guess, through the years."
Posted by Pamela Espeland at 6:55 PM