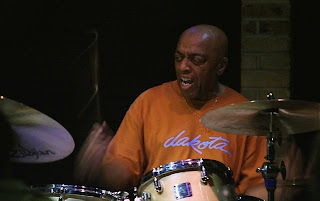 Every time I see Roy Haynes—which is every time he comes through town—I'm astonished. Not by the fact that he's 83 and still playing, but by how he plays. The man is a blur. I've heard people say that Haynes looks 60 and plays like he's 40, but I've seen 40-year-olds who seem a lot more tired than he does.

The second set of their one-night stand at the Dakota (co-sponsored by the Artists' Quarter, where Haynes usually plays when he comes to town and where he recorded his most recent CD, Whereas) begins with Monk's "Bemsha Swing," a Haynes standard that makes room for nice long solos by the youngsters.

Next, Miles Davis's "Solar" features as complex and interesting a piano solo as I've ever heard, making me sit up and pay close attention to Bejerano. Born in Miami, Florida, a professional musician since age 15, he moved to NYC in 2000 and within a year had been invited to join Roy Haynes's quartet. Talk about landing on your feet. Bejerano has made a solo CD and two recordings with Russell Malone, plus Haynes's Grammy-nominated Fountain of Youth (with Marcus Strickland on horns). I'm feeling a Bejerano shortage in my own music collection.

Haynes, Bejerano, and Wong lay down the rhythm, then Shaw blows hard to start "My Heart Belongs to Daddy," the Cole Porter tune that has become a huge jazz standard. If I'm not mistaken, Haynes pretty much always plays this tune (he did in March, and he has whenever I've heard him at the AQ) but I don't mind. Shaw is out front in the spotlight and Haynes is Mr. Cool.

Suddenly it feels as if the whole room is full of sound, every square inch upstairs and down, every corner, and if I opened a door or window it would pour out into the street.

After Shaw's masterful opening (which brings some people to their feet and raises shouts of "Jaleel!" from around the room), Haynes lets loose and it's thunder and lightning, then kisses on the cheek, then some business with the high-hat, and finally just sticks: Haynes stands up and walks around the stage playing his sticks, going in turn to Shaw and Bejerano and Wong, still playing sticks, and finally that's all we hear and then just the memory of the rhythm in a room that has fallen still to hear every ticka tick. 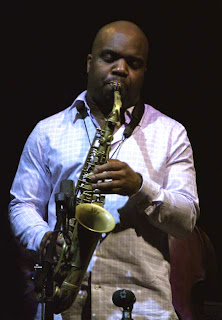 Complete change of pace and mood: Shaw performs a solo that opens into a ballad; it's "Everything Happens to Me," the poor-me, country-and-western song of jazz:

I make a date for golf,
You can bet your life it rains.
I try to give a party
And the guy upstairs complains.
I guess I'll go through life
Catching colds and missing trains...
Everything happens to me.

Silly lyrics but a lovely tune and Shaw plays it beautifully.

Haynes takes a long solo, starting on mallets (boom boom) and taking off from there. It's as if we're hearing the history of bebop (Haynes played with Lester Young, Bud Powell, Charlie Parker, Miles Davis, Monk, and on and on) and the immediacy of right now, as alive as every heartbeat in the room. As HH says, "Viva le Roi!"

Then Haynes stands up from his drums, comes to the mike, and asks if the young man seated at the table in front of him is a drummer. Of course he is. Would he like to play something? Why not. For the next ten minutes or so, this great and legendary artist lets young drummers in the audience come up and play. Something to tell their grandchildren. 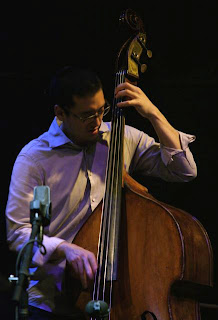 The final tune: "Summer Night," written by Al Dubin and Harry Warren, recorded by lots of people: Chick Corea, Miles Davis, Keith Jarrett, Stan Getz. As I write this, I'm listening again to Haynes's version (it's on his Fountain of Youth CD) and also to Miles's version (recorded in 1963 for Seven Steps to Heaven).

The Miles version is slow and wistful, looking back at the summer nights that have passed and are gone forever. For Haynes and his quartet, it's a whole different tune, racing toward the summer nights yet to come.

P.S. Haynes played the Isthmus Jazz Festival in Madison, Wisconsin, before coming to the Dakota. Read a fine article here. It was written by someone named Susan Kepecs, and when I tried to find out more about her, I came across this brief bio: "Susan Kepecs, honorary fellow in the University of Wisconsin-Madison department of anthropology, is an archaeologist and freelance writer." That's a skill set you don't often see.

Photos by John Whiting. Sorry we couldn't get Bejerano; too dark at the piano.
Posted by Pamela Espeland at 10:32 AM