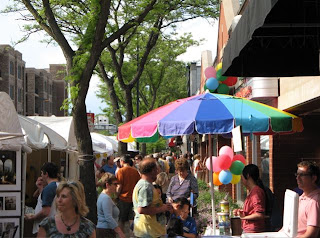 When: 5/31/08
Where: 50th & France
Who: 400 artists including some of our favorites: Jo Severson, Duke Klassen and Lades Glanzer, Sarah Dudgeon, Lee and Dan Ross

For three days each May, our normally snoozy street fills up with cars and 50th & France is given over to the Edina Art Fair. Fairly soon on Friday, people start returning to their cars with stuff on sticks: birdhouses, metal sunflowers, big glass balls. There's something for everyone at this too-large, sprawling, oddly juried fair. 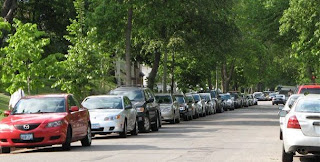 We spent Saturday looking at art and not-art, saying hi to friends, resisting temptation and ultimately giving in. Ate Cuban food for lunch. Returned home around 6 for cocktails and at 6:30 all hell broke loose weather-wise. The sky blackened, wind blew, rain fell, then hail. Lots of hail. Hosta-shredding, car-denting hail. Our street flooded and clumps of hail floated by. 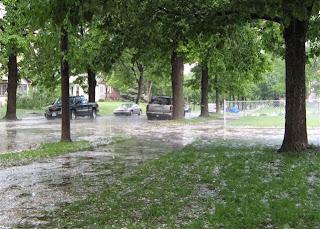 Over at 50th & France, we learned the next day, it was chaos. Tents flew up and away. One artist tried holding on to his, then realized he was being lifted into the air and let go. Glass was shattered and pottery smashed.

Potter Bob Husby later told the Strib, "Those tents, they're basically big box kites." His tent went, and he lost $600 worth of work.

Many people make their living doing art fairs, and I think it must be a difficult life, and I raise my martini glass to them.
Posted by Pamela Espeland at 4:37 PM