Jazz is NOW!: The NOWnet

I like everything about Jazz is NOW! The idea of a nonprofit composers' ensemble that performs original music. The music itself. The musicians who write and play it. The inviting, well-written, easy-to-navigate, time-sucking Web site, with videos of their performances, photos, downloadable charts, MP3s, and a blog.

I want JiN to survive and thrive (as much as jazz can thrive these days, and I suppose that depends on how you define "thrive"). I want Jeremy Walker to be our John Zorn and the Minnesota Opera Center (or wherever) to be our Stone and someone to start our Tzadik label. I want people with money to throw some at JiN. They need it. As Meg Cortright, JiN's board president, said during her introduction to the evening, "A jazz musician is always in recession."

Tonight's event is billed as JiN's second open rehearsal for their formal premiere, set for October 9. I missed the first rehearsal in March but can hear it on the Web site anytime I want.

I don't know what refreshments were available in March but tonight it's a $5 bottomless cup of sangria. Homemade, a good deal and lots of fresh fruit, steeped overnight in wine. 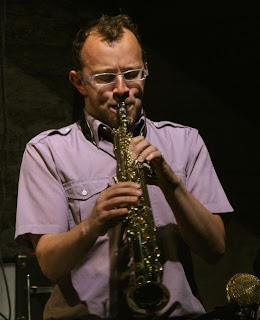 The opening tune is Walker's "Cool Turkey." The theme, he explains, is moderation in everything. "It's full of stops and starts, kind of like when you're at a party and you think...better not." Fultz is featured on the saxophone and this bright, bouncy piece is a solid start.

Everything we hear tonight, with two exceptions, is an original composition by Jeremy. He will introduce each tune and preface each introduction by saying he doesn't like talking. But it helps to know what to expect, especially when all of the music is new, and I hope he keeps doing this in future performances. Or, if he really hates doing it, maybe someone else in the band can step up.

This is the first time I've heard Walker play piano. I like what I can hear but it's subdued, partly because the piano isn't miked and partly, perhaps, because this is an early public performance of someone who played the saxophone for many years before that became impossible. Also, this is the first time I've heard drummer Zhorne. Jeremy tells me later that he and Tim have been buds forever. 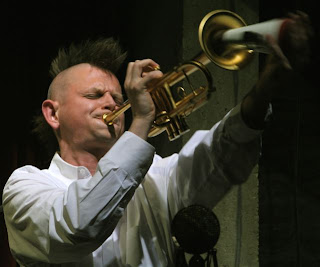 For Kelly Rossum's tango "Seduction," his shiny new trumpet wears a mute and sounds sexy. Thomson plays soprano sax and sounds sexy, too, especially during his snake-charmer solo. Sometimes we hear all three horns, with Kelly doing a wah-wah, and behind them Cox makes the strings of his bass speak deep round vowels. The mute gives the trombone four different voices, depending on whether it's in or out or how far in or out it is. Toward the end, Cox bows his strings.

"Play" was inspired by dancers at the Xenon company, where Walker's wife Marsha used to work. It's speedy and upbeat—major key. The piano is muted, mostly comping.

Walker originally wrote "June" with himself in mind on lead sax; today Fultz has Walker's horn and plays the part. "We don't repeat the melody because I wanted it to be linear," Walker explains. "When you walk you don't go back to the beginning; you keep going and arrive home." The melody has a Glenn Miller sweetness to it, and old-fashioned harmonies; by playing it just once, the band makes me long to hear it again. It's wistful, like time is passing too quickly.

For "Hill Country," an homage to pianist/composer Andrew Hill, Walker's brother Tom joins the band on acoustic guitar. The horns go high, Jeremy plucks the strings inside the piano (unless I misremember), and the mood gets lazy. We hear the first extended piano solo of the night. Soft, thoughtful.

Jeremy tells us he was listening to a lot of Willie Nelson at the time he wrote "Hill Country." What's up with jazz musicians and Willie Nelson? Wynton Marsalis's new CD, Two Men with the Blues (due out July 8), is with Willie Nelson. It should be fun.

I look around at the audience, which is pretty decent for an open rehearsal. A lot of young people are in the crowd.

After the break and more sangria with oranges and grapes: "Way Back Was," with Tom on guitar again. Backporch blues guitar, with muted trumpet.

I'm enjoying the evening very much. A small group of musicians, an intimate setting, lots of people we know, new music: It feels like chamber jazz. Relaxed, easy (at least for the audience, sipping on our sangrias), personal.

Fultz opens "Requiem for the Day" on flute. A response to a soldier's death in Afghanistan, it's tender and beautiful. Walker introduces "The Pumpkins' Reunion" by saying it's "about seeing my son and missing him." Slow and sad, it ends with a pensive piano solo.

"If I Were a Cowboy (I'd Ride the Hell out of Here)" is a sassy shuffle blues. And the night ends with Fultz's "Dorothy and Robert," a tune about his grandparents when they were young and courting. Fultz opens on tenor sax. It's a waltz, a love song, a happy send-off into the night.

You can see and hear most of the actual performances here.

Photos by John Whiting.
Posted by Pamela Espeland at 1:10 PM