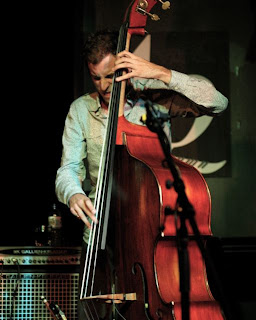 Because I don’t follow indie rock, I don’t know Chris Morrissey the indie rocker, whose bands include Ben Kweller, Mason Jennings, the Bill-Mike Band, Wishbook (formerly Cowboy Curtis), and Haley Bonar. I first heard of Chris Morrissey the jazz musician/composer last July when HH and I went to Maude because Dave King was playing there with Chris Thomson, Bryan Nichols, and some guy named Chris Morrissey. Who turned out to be a tall, rather thin young man with long, elegant fingers who plays the bass like he’s serious about jazz. In fact, he calls jazz his “original passion.”

Back then the quartet was in the midst of recording a CD, and this weekend was the official Minneapolis/St. Paul CD release for The Morning World, just out on Sunnyside, not too shabby. Morrissey is from here, recently moved to NYC to “get another city under his belt,” came home to launch his CD and promises to return one day to live. We’ll see.

At the crowded AQ, we hear originals by Morrissey and just one standard. Something slow and measured to start; probably “The Skinny Part of Idaho.” “Midland Picnic Area,” which Morrissey introduces as “a tribute to a part of the country without a lot of songs written about it," is a high-energy piece that Nichols takes even higher with his piano solo, after which Lewis plays like a man possessed and King is two drummers or maybe three, and suddenly the air sparks and crackles with swing.

“The Morning World Is Waiting,” the title track, pulls the tempo back again so everyone can breathe. It’s a bright-eyed ballad, pretty and sweet. 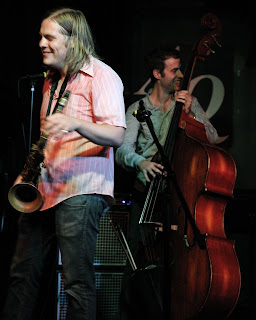 The tunes are on the short side, like pop songs. The melodies aren’t familiar so it’s easy to think there’s a lot of improvising going on amid skeletal composition until you notice that Morrissey and Nichols, or Lewis and Nichols, are playing long runs of notes in unison. The music is tightly composed, compact, intricate, with room for invention.

“October Aught Four” starts off unhurried and thoughtful, then picks up speed and intensity. It feels sunny, optimistic. “Electric Blanket” is full of big chords and brand-new. “We learned it yesterday and played the world premiere” [at last night’s AQ show], Morrissey says. “This is the second world premiere.”

He introduces “The Curious Habits of Harold Hill” by telling us that he played the part of Winthrop in the Chanhassen Dinner Theater’s production of The Music Man “when I was young.” (Everyone laughs; he’s 28.) His father was Chanhassen’s music director. The tune is layers of repeated rhythm—first in eight pairs (da-da, da-da), then six—over which Lewis’s saxophone floats and soars. Most tunes seem to feature the saxophone, though that could be an illusion caused by the fact that Nichols, Morrissey, and King all stay in the same place while Lewis paces the rest of the stage, always on the move, so that’s where your eyes naturally go. 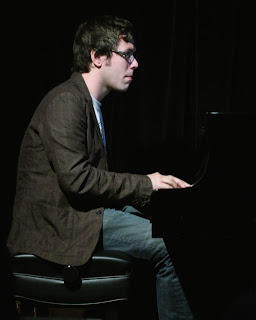 [Aside: While King is playing with the Morrissey Quartet at the AQ, the other two members of his band The Bad Plus are at the Village Vanguard, with Paul Motian on drums. Read Nate Chinen's review here.]

For “None is the Number,” Lewis starts on soprano sax (he plays soprano, alto, and tenor tonight) and Morrissey takes his first solo on the bass, accompanied by Nichols. This is the only tune of the night that sounds heavily influenced by Reid Anderson of The Bad Plus, not that I’m complaining.

Introducing “Mountain Don’t,” Morrissey tells us a story from his childhood, when he looked up to Lewis as the coolest guy he knew. (The two grew up together; their moms are friends and both are in the house tonight.) Trying to impress Lewis, Morrissey told him he drank Mountain Dew. Lewis replied “Mountain don’t, man,” and a song was born. “I wrote it ten years ago,” Morrissey says. Not bad for 18. The first half swings hard, Morrissey takes another solo, then there’s a sudden shift into a slow, thoughtful mood, as if another tune has been grafted on. Nichols spells out an old-fashioned melody, Morrissey bows his bass, King switches to brushes and now it’s something Bill Carrothers might play. (Carrothers, as it happens, is sitting at the bar.) 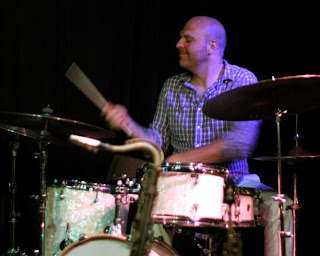 “The Sub Prime Sword Claims Another,” sharp and angular, gives way to “Take the Coltrane,” the one standard of the evening. Everyone stretches out in a lengthy solo—including King, in his first solo of the night—and it’s as jazzy as anything ever has been.

[For City Pages, Andrea Swensson wrote: "What blew me away at Saturday night's show was how each of the four players' talents were showcased without ever drawing too much attention toward one musician... Because of this, Morrissey's compositions themselves became the star of the show." What she said.]

“If Rushmore Should Fall” is the last tune on the CD and the end of the show. Starting out gloomy-doomy on arco bass and piano chords, with Lewis playing questions on the saxophone, it picks up speed and volume, has second thoughts, and sighs. Called back for an encore, Morrissey says, “That’s all the songs we know.”

There's a feeling all night that we're hearing something special and new, something that can go places. It's hard to make a full-time commitment to jazz these days, especially when, like Morrissey (and now Lewis, who has been playing with Andrew Bird), you're in demand by rock bands that draw bigger crowds and paychecks and can tour. So it's understandable that Morrissey is playing this Saturday (at Tiffany's in St. Paul) with Wishbook and the Bill-Mike Band, and will soon go out again with Kweller and then Jennings.

But I hope The Morning World isn't a one-off. Jazz needs people like Morrissey, who can move between genres with confidence and sincerity, commitment and joy, without compromising.

Photos by John Whiting. T to B: Morrissey, Lewis and Morrissey, Nichols, King

Posted by Pamela Espeland at 7:07 PM