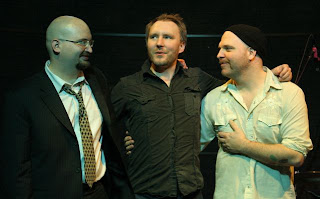 There's a CD called The Bad Plus authorized bootleg new york 12/16/01. Mine is signed by Iverson, Anderson, and King and dated 2002, which may be the first time I saw them, at the old Dakota in Bandanna Square. I've tried to catch them every time they've come into town since then (King still lives here, but Iverson and Anderson don't) because they are always stimulating and thought-provoking. David Remnick, editor of The New Yorker, recently saw them at Carnegie Hall and dubbed them "the Coen brothers of jazz."

Back at the Dakota for their now-traditional series of holiday shows, playing for four nights of sold-out, open-curtain crowds (meaning the supposedly sound-deadening curtain between the club side and the restaurant side is open and the whole place becomes a club), they were in fine form, playing a selection of songs old and new: "Prehensile Dream," "My Friend Meditron," "Beryl Loves to Dance," "Cheny Pinata," "Old Money," "Lost of Love," Rush's "Tom Sawyer."

I was amazed as always by their ability to all move in different rhythmic and melodic directions, then mysteriously meet up again at precisely the same moment. The chords never go where you expect them to go. Iverson seemed to have four hands instead of his usual three; his playing was even more complex and layered. Anderson's compositions still remind me of "Bolero" (slow start, gradual crescendo, big finish), but not in a bad way because they're beautiful. King was all over his drums and toys, grinning through most of the evening. Every second or third song, Iverson stood up, reached for the microphone, faced the crowd, and told us about the music, embroidered with stories delivered in his deadpan style. ("This is a song about a girl named Beryl. She's a little shy, a little awkward...she wears glasses...but when she's alone in her room, she turns up her stereo and takes it to a good place.")

I enjoyed the whole night but their first encore was especially exciting to me: a short piece called "Semi-Simple Variations" by American composer Milton Babbitt. I learned from reading the Bad Plus blog that Iverson performed this in 2007 in "an evening of spooky modern music" at the Paris Bar at the National Arts Club in New York. On the bill: music by Babbitt, Charlie Parker, Shostakovich, Schoenberg, Ives, Bartok, Stravinsky, etc. Wish I'd been there. I'd love it if the Bad Plus took on classical music the way they have pop music.

The set we saw ended with "Heart of Gold," with Anderson and King softly singing the words. A few people laughed when they recognized the Neil Young tune, but to me, it wasn't funny at all. It was tender and reflective and melancholy. I may need to revise my opinion of the Bad Plus from "mostly ironic" (9 on a scale of 10) to "sometimes ironic" (maybe 4 on a scale of 10).