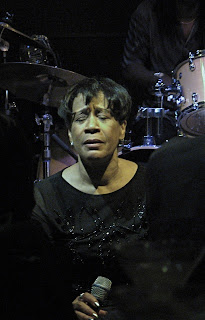 
In the worst snowstorm of the winter (so far), traffic was a tale of spin-outs, turnovers, and hours-long gridlock. But Miss Bettye Lavette was in town and we're fools for music. If she could show up, so could we.

Lavette is better every time we see her. After 40 years of relative obscurity (she had an R&B Top 10 hit at 16, not much after that), she's performing, recording (she just released her third CD in four years), and touring. At 61, she looks fabulous, sexy and fit. And she loves the Dakota, crediting owner Lowell Pickett with booking the first gig of her comeback.

Backed by a fine band--music director Alan Hill on keyboards and vocals, Brett Lucas on guitar and vocals, Chuck Bartels on bass and vocals, Darryl Pierce on drums--she gave us classic Bettye cuts ("He Made a Woman Out of Me," "Falling in Love") and new songs from her latest, The Scene of the Crime, recorded at Muscle Shoals with the Drive-By Truckers: a John Hiatt tune, "The Last Time," Willie Nelson's "Somebody Pick Up My Pieces," and a searing interpretation of Scottish R&B singer Frankie Miller's "Jealousy." For "Somebody Pick Up My Pieces," she sat on the floor, but for the rest of the time, she was a dancing, prancing blur on the stage, expressive and deeply emotional.

During her final song, "Close as I'll Get to Heaven," she walked through the audience, singing to people and touching them. She was letting us know that performing for us is heaven for her. For her encore, her band left the stage and she sang Sinead O'Connor's "I Do Not Want What I Have Not Got" a capella and all alone. I've heard her do this before; this song is becoming for her what "Amazing Grace" is for Aaron Neville, something people are going to demand if she ever stops doing it. Which she probably won't because it works so well, and as she told us midway through the evening, "I'm just doing whatever the hell I want to do."
Posted by Pamela Espeland at 2:39 PM