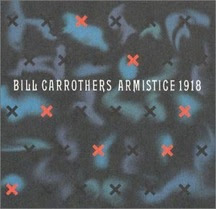 I previewed this show for MinnPost, before which I spent a lot of time listening to the double CD (thanks to Don Berryman for loaning it to me). I'm glad my editor let me write about it because it's not exactly a ho-ho-holiday program or theme.

In an email interview, Carrothers (who was in Italy at the time) told me about the band he's bringing to the AQ:

"The bass chair is being played by Gordy Johnson.... The European musicians [Jean-Marc Foltz on bass clarinet, Dre Pallemaerts on drums] are coming to the USA to record a CD of children's music with Peg and I. We thought it would be nice to play the AD1918 music since everyone will be there. It will be the US premiere.

"Dre Pallemaerts and I have been playing together for over 10 years, in trio, with AD1918, and in other people's groups. Matt Turner lives in Appleton so it's not that big a stretch for him to come. He was on the original CDs (as a blind date, I had never played with him before) and I loved his playing from the moment he picked up the bow. Jean-Marc Foltz was recruited for the AD1918 project when we started touring in Europe. I had heard him play before and he's incredible. Jay was on the recording and I picked him because I knew he would provide the perfect sound effect backdrop for the music, which he did. I knew Jay would be committed to the emotional content of the music and his participation was, and has been, vital to the success of the music.

"Peg was the logical choice for the vocal part because she sings great, and she understood the material and how to float over it as the Angel of the Battlefield. I had to be on it because they needed someone to look sexy on the cover and to make the sandwiches and beer for the session."

On the recording, the track called "Christmas 1914 (Silent Night)" (about the brief truce that took place between British and French troops and the Germans on Christmas Eve) was performed by the Knob Creek Choir, which consisted of the musicians who made the album (Carrothers, his father, Jay Epstein, etc.), the engineer at the studio, and several of Carrothers's friends including Davis Wilson, the longtime doorman at the Artists' Quarter. Carrothers explained that the choir was "named for the bourbon we were drinking the night we sang."
Posted by Pamela Espeland at 7:30 PM