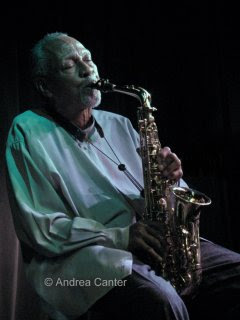 Alto saxophonist Frank Morgan has died. We read in the Strib on Friday the 16th that he had been diagnosed with inoperable colon cancer soon after completing a month-long European tour and was in the hospital, listening to Charlie Parker and autographing his CDs for staffers. He died later that day.

We last heard Morgan at the Dakota in July, during the Twin Cities Jazz Festival. He played the Dakota with Irv Williams on tenor sax and Grace Kelly on alto sax. On that stage, Morgan was the middle child, 74 years old compared to Williams's 87 and Kelly's 15. Earlier, in February, he had played the Dakota with pianist Joanne Brackeen. Both times, I was drawn in by his artistry and his quiet humility. I thought, since he now lived here and was only in his seventies, that I would have more chances to see him.

Photo by Andrea Canter.
Posted by Pamela Espeland at 11:59 AM