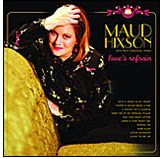 What to give the jazz-loving friend, or the friend who might grow to like jazz with a little encouragement? For this week's MinnPost piece, I asked local jazz artists to recommend CDs by other local jazz artists. A dozen responded within 24 hours.

To fit everyone's recommendations into an article that was supposed to be around 500 words (and ended up around 800), I had to edit down what people wrote. Here are a few comments I would have liked to include in their entirety:

Singer and KBEM radio personality Arne Fogel on Maud Hixson's Love's Refrain and the Wolverines' Voracious: Live at the Times: "Both of these CDs sport a great deal of musical integrity. These discs feature people who know what they're doing and they just nail it, with no pretense. I admire that, and I enjoy hearing that sort of musical declaration."

Trombonist Dave Graf on the Hornheads' Fat Lip: "For someone who would dig some fun and funky a capella horn work, the Hornheads is probably the slickest horn section on the planet. Their 2004 release Fat Lip is an incredible display of chops and finesse, imbued with a wicked sense of humor. Michael B. Nelson's inventive writing, and the group's astonishingly tight execution of it, just makes you gape in wonderment. And lest you think it's accomplished by some sort of studio magic, they sound just as amazing live."

Bassist Gordy Johnson on Maud Hixson's Love's Refrain (a CD a lot of people like): "Wow, at first I thought of just ignoring this, or bowing out. It's a tricky question. Then I remembered driving home from a gig and hearing a track from Maud Hixson's new disc Love's Refrain, featuring just her with Rick Carlson at the piano. I would give that disc to anyone and everyone. I got goose bumps as I was listening on the way home that night. Everything about it is so absolutely right on, it's amazing! The piano is perfect and beautifully recorded. The piano playing is classic Rick Carlson: Swinging and casual, understated and perfect. Maud sounds relaxed and has such command of her art. Her intonation and phrasing are immaculate. It's in the groove and polished, totally first class."
Posted by Pamela Espeland at 7:34 AM