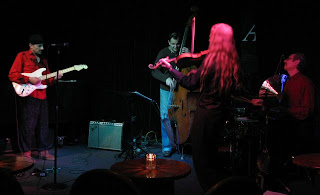 Strings and sticks, cymbals, skins, and gongs: no horns, no keys. Magraw, Bates, and Epstein play all over the Twin Cities in all kinds of configurations, but when they come together as Red Planet, it's a unique and wonderful sound. Much of what they play at the AQ is mellow and melodic, with the focus shifting from Magraw's solos to Bates and Epstein and back again, circling the stage. When they play a series of Coltrane tunes back-to-back, the only one I recognize by name is "Revolution." Schulte guests for most of the second set, and it's a glorious concentration of strings. Toward the end of the evening, when many people have already left (it's almost 1 a.m.), I realize the music stopped being about the audience long ago; not that we don't matter (we do) but Magraw, Bates, Epstein and Schulte have gone to that place where music has its own life and purpose in that particular moment, and it's pure creativity. They're four cooks in a kitchen, and we're lucky to be at the table.