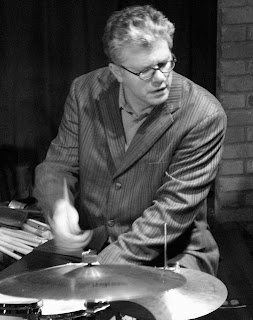 Matt Wilson brings his Carl Sandburg Project to the Minnesota Opera Center on Friday, December 7. I wrote about this very interesting project—jazz improvisation plus poetry—for MinnPost this week. I've seen Matt play several times: at the Dakota with Denny Zeitlin, and also with his Arts & Crafts group (a couple of times); and at IAJE in New York earlier this year, where he gave a drum clinic and showed a student drummer how to get 10,000 different sounds out of the same cymbal. Matt is a high-energy guy who clearly loves what he does and often interjects humor into his performances; the last time we saw him at the Dakota, he played one of his drums with his foot, and he was wearing a striped sock.

Hear bits of the Carl Sandburg Project.
Posted by Pamela Espeland at 10:57 AM