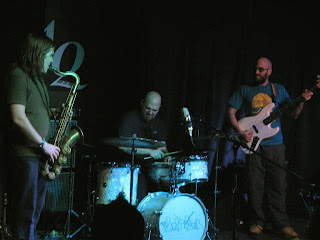 On the final night of a three-day stay at the AQ, Happy Apple was mellow. I often hear Lewis when his horn is on fire, so I sometimes forget he's equally capable of thoughtful, tender, lyrical music and a velvety tone. This wasn't straight-ahead jazz—Happy Apple doesn't go there—but it was beautiful and very accessible.

As always, the show was punctuated by King's between-songs tall tales. Something about royalties earned from Hooters. A fictitious gig with the comedian Gallagher and the Insane Clown Posse. A Who-Can-Hold-the-Longest-Note-on-the-Soprano-Sax competition between Lewis and Kenny G; Kenny G cheated and won.

Their song titles are equally wacky: "Still Life for the Study of Sibling Rivalry," "Lefse Los Cubanos" (King: "A cinematic exploration of the historical union between ancient Scandinavians and the Cuban people—the Scando-Cuban connection—based on 1,000-year-old recordings from the Smithsonian of Vikings jamming with Cubans"), "Freelance Robotics" ("A panorama of a future where artificial intelligence is used for things like painting garages"), "The 1976 Aquatennial Parade," "Calgon for Hetfield" (I'm guessing James Hetfield of Metallica? What's the connection with Calgon? Oh never mind). King introduced "Back on Top," the title track of their latest CD (2007), by explaining "We're back on top of the Worst-Selling Jazz Records list."

Happy Apple has been together for 12 years, and they have their act down. When they play, Lewis throws his whole body into it; when he's not blowing, he paces like a caged cat. His lyrical phrases stitch the music together. Fratzke's big, deep bass provides the supports that allow for Lewis's and King's cantilevered excesses. And King's drum punches holes in everything.

Photo by John Whiting.
Posted by Pamela Espeland at 11:04 AM