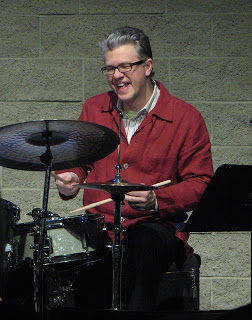 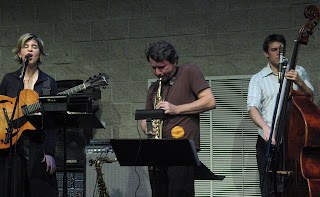 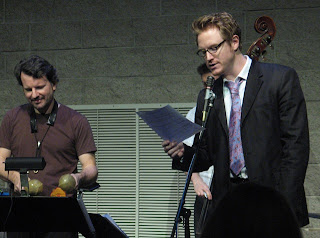 I previewed this Jazz is NOW! event for MinnPost and arrived at the venue on a cold Minnesota night. The Minnesota Opera Center is a big square box in the basement of a former warehouse; normally used for opera rehearsals, it turns out to be perfect for music: high-ceilinged, airy, bright-sounding, and the stage was well-lit. Because the evening is co-sponsored by the Minnesota Opera, it begins with a nod to that great art form; accompanied by pianist Bryan Lemke, dishy young bass Christopher Job sings a couple of upbeat arias. Then the headliners come on stage: leader and drummer Matt Wilson, Jeff Lederer on saxophones and reeds, bassist Ben Allison, and Dawn Thomson on voice and guitar.

Wilson has more up-front, out-there personality than any drummer I've ever seen. He's animated, expressive, and vocal; he punctuates his own performances and those of other musicians with enthusiastic "Woooos!" He reaches out to the audience and connects; you'd have to be dead to resist his charms. The Carl Sandburg Project is a treat, if hard to define. It's not a jazz gig, not a concert, sort of a theater piece, kind of an art piece, and an ever-evolving work in progress. When I interviewed Wilson for MinnPost, he said, "It is always changing. We never play it the same way once."

Wilson, a relative of Sandburg's by marriage (his great-aunt was wed to Sandburg's first cousin Charlie Krans), uses Sandburg's poems in four ways: translating a poem directly into a song; reciting a poem as part of a separate composition; composing music influenced by a poem; or freely improvising, using a poem as inspiration. This approach adds variety to a program that might otherwise be just another collection of art songs.

We hear "Choose" ("The single clenched fist lifted and ready/Or the open asking hand held out and waiting/Choose! For we meet by one or the other"), a march with a lot of snare and a rousing start to the evening. From there, an improvisation to a poem about a prairie barn from Sandburg's The People, Yes! It's Charlie Krans's barn that Sandburg writes about: "That old barn on your place, Charlie, was nearly falling down last time I saw it, how is it now?" Lederer reads the text. Next up, a countrified "Cover Me Over" ("in dusk and dust and dreams"), the dark "Trafficker" (one of Sandburg's Chicago poems; Ben Allison reads, accompanied only by Lederer on sax), "As Wave Follows Wave" (the title track of Wilson's 1996 release on Palmetto; operatic bass Chris Job returns to the stage to recite this one), "Past Friend" (in which Thomson's electrified hollow-body guitar sounds like a steel drum, Lederer makes his saxophone chirp like a bird, and Matt squeals his cymbals), a poem about a bubble with rainbows (with a taste of the Beatles' "I Will" tossed in), and a poem about how the moon is a woman in a silver dress, in which Lederer's soprano sax is lovely nighttime music, even on a cold night like ours.

After a short break, during which the crowd thins only slightly, the band returns to try out some new pieces. "We Must Be Polite" is from Wind Song, a book of children's poems by Sandburg that Wilson discovered in a used books store. The poem tells children tongue-in-cheek what to do if an elephant knocks at your door, and what to say if you meet a gorilla. Job reads the text and he's wonderfully hammy; Lederer plays the maracas and later the clarinet.

Wilson becomes DJ Matt in a sampled version of Sandburg reading "Fog" ("The fog comes in/on little cat feet..."). His drums and Allison's bass weave through and around Sandburg's looped, layered, beat-filled voice: the fog/fuh-fog/fuh-fuh-fuh-fog. It's fun. The program takes a serious turn once more, this time into "To Know Silence Perfectly" ("To know silence perfectly is to know music"), a piece with its own pauses and silences built in. The penultimate work of the evening, "Offering and Rebuff," a love poem ("I could love you as dry roots love rain, I could hold you as branches in the wind"), is interpreted as a country dance.

At the end, Wilson invites us all to read Sandburg's "Snatch of Sliphorn Jazz" ("Are you happy? It's the only/Way to be, kid.... Be happy, kid, go to it, but not too/Doggone happy") while the band improvises. It's cacophonous and joyous, with Lederer wild on the soprano sax; an energetic finale and one that sends us into the night pretty doggone happy.

Photos, top to bottom: Matt digs Carl; Dawn, Jeff, and Ben; Jeff and Chris
Posted by Pamela Espeland at 9:46 AM